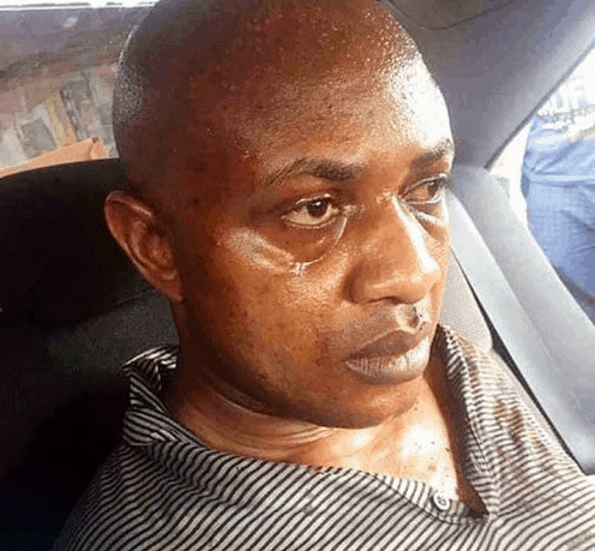 Chukwudumeme Onwuamadike, a.k.a. Evans, Kidnap Kingpin today broke down in tears while approaching the courtroom of Lagos State High Court in Igbosere, where he is facing trial of two fresh charges of kidnapping.

Recall Naija News reported that Evans initially protested going to court as he refused to come down from the prison van. He was eventually forced down by warders on the order of Justice Adedayo Akintoye.

On getting into the court room, Evans immediately indicated to the judge that he had something to say.

“I have an explanation to make,” he said. “Since I have been in the maximum prison, they have been maltreating me; no visit, they don’t feed me well, I have eye problem and I can not see afar.”

But a prison official countered him, stating that he was been given the same treatments other prisoners were receiving.

“We have been treating him very well; he is well fed and people have been visiting him.

“A doctor has been checking him; the doctor came to check him yesterday (Sunday) and even this morning, before coming to court; because he was saying he can’t be in court, that he is not feeling fine.

“But when the doctor checked him yesterday (Sunday) and this morning, the doctor said he was healthy and that he saw no reason why he shouldn’t be in court,” the prison official said.

But Evans said he was only seen by a nurse and not a doctor.

Counsel for the second defendant, Ogedi Ogbu, told the court that his client, Joseph Emeka, had also made the same complaints to him.

But the Lagos State Director of Prosecutions, Ms. Titilayo Shitta-Bey, said Evans was only making up an excuse, urging the court not to buy it.

“That was the same thing he said before an Ikeja High Court and we wrote the prisons and they wrote us back that he was being taken care of like every other inmate,” Shitta-Bey said.

Reacting, Justice Akintoye directed the prison officials to ensure that Evans and his co-defendants were treated like other inmates, noting that they were still presumed innocent.

On the request of Evans’ lawyer, Olukoya Ogungbeje, who had earlier written to the court, praying that the case be stood down, the judge stood the case down.

But as soon as the judge rose, Evans broke down in tears.

“What have I done to you people? They have been beating me; no good food; I have been locked up in one place since August 30 last year; why are they taking my case personally? Let me face my trial alive, why do you people want to kill me,” he said, sobbing.

About then, his lawyer, Ogungbeje, came into the courtroom and began to pacify him.
The defendants were eventually arraigned on the fresh charges.

Evans was arraigned alongside Joseph Emeka, Linus Okpara and Victor Aduba. The charges border on “conspiracy and unlawful capture.”

The state alleged in the charges that the defendants conspired with some persons still at large to “unlawfully capture one Uche Okorafor on the 21st of November 2014, at Festac Town, Lagos; and demanded a random of $2m.”

The DPP said they acted contrary to sections 409 and 269 of the Criminal Laws of Lagos State 2011, adding that they were liable to punishment under the same law.

But they pleaded not guilty.

Justice Akintoye adjourned till May 25, 2018 for commencement of trial.