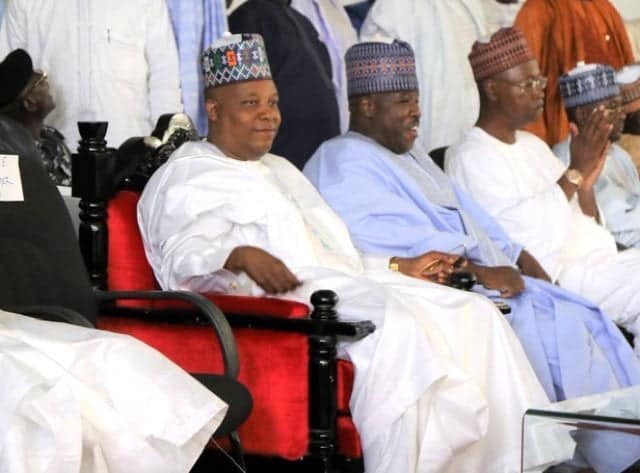 Ali-Modu Sheriff, former National Chairman of the Peoples Democratic Party (PDP), has mended fences with Kashim Shettima, Governor of Borno State, describing the All Progressives Congress (APC) as his home.

This marks Sheriff’s official decampment from the PDP to the APC after his tenure as the former’s National Chairman came to a turbulent end at the Supreme Court in July 2017.

Sheriff and Shettima have been political foes for a long time, but both men ‘kissed’ and made up on Friday at the Borno State government house in Maiduguri, ahead of the APC ward-level congresses scheduled to hold on Saturday.

Speaking during the meeting, Sheriff expressed gladness at rejoining the party “I helped to form in the past”, while also calling on Borno citizens to support Shettima’s administration.

“I rejoined my great party, APC following the misunderstanding we had in PDP when I was the national chairman,” Sheriff said. “I have to come back home and rejoin the APC which is my party I helped to form in the past.”

“I am joining APC as an ordinary member, and I want to call on all and sundry to support the leadership of governor Kashim Shettima and APC in the state.”

Responding, Shettima said he welcomes Sheriff back to the fold and would work with him. And on the APC ward congresses, the Governor said he will not interfer, but will allow the exercise go ahead free and fair.

“I do not have any particular candidate at heart, but prayed for God to elect credible and selfless leaders,” he said.

During his time as PDP National Chairman, Sherrif had described the APC as a party that “cannot work“, a battered ship that is bound to sink.

“The game has changed both in Borno and at the national level. APC has no solid foundation; a party cannot be built around an individual,” Sheriff told journalists in July 2014.

“I have taken time to study the package called APC and come to realise that it won’t work. And any serious politician who knows his onions would not want to be in a ship that is bound to crash.”

Even after the Supreme Court judgement that sacked him from office, Sheriff still pledged allegiance to the PDP, posting a message on his tweeter handle saying: “This is the time to build the PDP and to focus on the future, which include reclaiming power from the APC. Moving forward, we must embrace true reconciliation, so as to be united as a formidable option to send the APC packing in 2019t.”