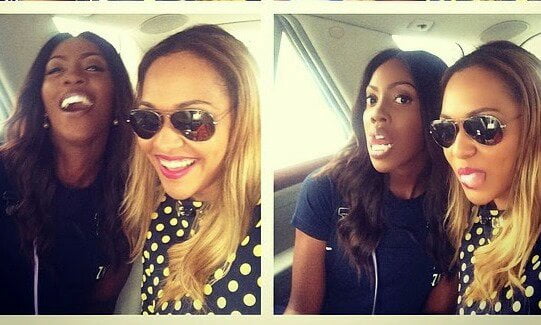 There has been a reports on social media that Tiwa Savage and Tania Omotayo have both un-followed each other on Instagram.

The beef was discovered by some fans of both celebrities, after Tania reposted a shady note right after rumours surfaced that Tiwa is now in a relationship with Wizkid.

“You cannot be friends with people who secretly want your life…Stay woke,” said the post shared on Tania’s page.

The rumour that Wizkid and Tiwa are dating surfaced days after singer Kimora Nelson took to her social media to call out Tiwa Savage, accusing her of ‘forcing’ herself on Wizkid and pushing for a relationship with the younger singer.

The news has become a major point of topic for many on the social media, and more people are talking about the two after the post by Wizkid’s ex-girlfriend, Tania Omotayo.

Record has it that the two were very close friends, and now no longer follow each other on Instagram.

Rumored Romance: Tiwa is forcing herself on Wizkid – Singer Kimora

Wizkid-Tiwa’s Rumored Romance: Wizkid’s ex, Tania, throws shade as she and Tiwa unfollow each other