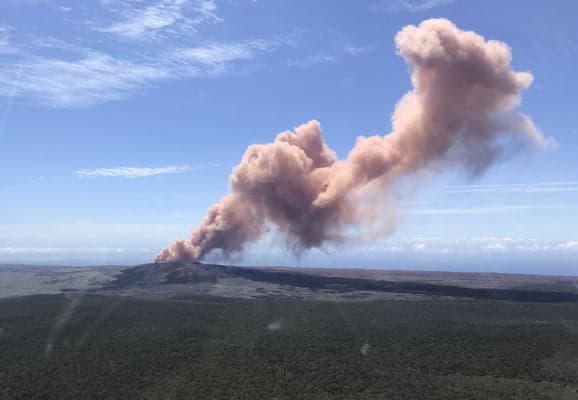 Volcano Will Be Followed By Earth Quake – David Ige

The US state of Hawaii’s killer volcano outbreak which started on Thursday, has caused alot of people to flee from their apartment and seek for safety and shelter.

David Ige, the Pacific island state’s governor, signed an emergency proclamation releasing disaster funds to the Big Island in the eruption’s wake, as local news footage showed streams of lava snaking through forested areas near Kilauea, one of the most active volcanoes in the world.

The Hawaii County Civil Defense Agency reported “steam and lava emissions from a crack in Leilani Subdivision in the area of Mohala Street” following the eruption, prompting a mandatory evacuation of some 1,700 people.

“White, hot vapor and blue fume emanated from an area of cracking in the eastern part of the subdivision,” the US Geological Survey said. The area has about 770 structures.

Hawaii’s emergency management agency said local community centers in the broader district, home to some 10,000 people, were open to residents impacted by the threat.

USGS authorities of the Hawaiian Volcano Observatory unit were both on the ground and headed into the air to assess the eruption, which followed hundreds of small earthquakes in recent days and began around 4:45 pm local time (0245 GMT Friday), according to the agency.

Earlier, at 10:30 am, a larger 5.0-magnitude earthquake south of the Puu Oo volcanic cone triggered rockfalls and potential collapse into a crater on the volcano, according to USGS.

Using his drone, area resident Jeremiah Osuna captured video footage of the red hot lava flow, which he described as the opening of a “fire curtain” that left him feeling “shock and awe.”

“It was like if you put a bunch of rocks into a dryer and turned it on — a lot of earth and pressure and fire just moving around,” he told Nigeria News.

After the eruption, authorities warned that “lava inundation,” fire, smoke and additional earthquakes could follow.

The Civil Defense Agency urged those under mandatory evacuation orders to stay away, as fire authorities were detecting “extremely high levels of dangerous sulfur dioxide gas” in the zone.

The governor revealed that the disaster is similar to characteristics of the 1960 eruption in the Kapoho area that “caused significant damage to public and private property in the lower Puna region” of the county.

Geologist Janet Babb of the Hawaiian Volcano Observatory told Nigeria News that scientists had been following an “intrusion of magma” down the rift zone since Monday afternoon in anticipation of a possible eruption.

She said activity from that particular fissure had stopped, but warned additional eruptions could occur and urged Hawaiians to following advice from authorities.