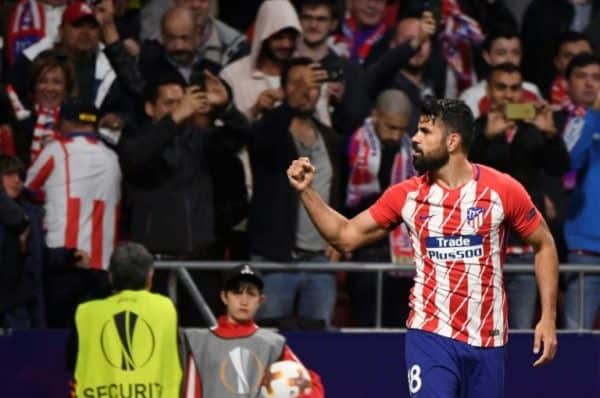 Atletico Madrid striker Diego Costa was a nightmare for Arsenal, as he helped his side to a 1-0 win in Thursday’s Europa League semi-final second leg to send the Spaniards into the final.

The game which was Arsene Wenger last match in-charge of the gunner was obviously not what he wish would be a glorious farewell as the manager of the side.

Atletico won the tie 2-1 on aggregate and will meet either Salzburg or Olympique de Marseille in the final in Lyon on May 16.

Diego Costa who terrorized for Arsenal when he played for Chelsea and the Spain striker broke the deadlock in a tight, tense game at the Wanda Metropolitano, striking in first-half stoppage-time after being played in by Antoine Griezmann.

Laurent Koscielny, Arsenal defender was wheeled on a stretcher after he reportedly sustained Achilles tendon injury and they struggled to keep up with Costa’s vibrancy and the flair of his attacking partner Griezmann.

Atletico did not create many chances but they always looked in control and kept a remarkable 12th consecutive clean sheet in all competitions at their Wanda Metropolitano stadium to reach a fifth European final since 2010.

Wenger’s side were blunt in attack against a typically determined and resilient Atletico defence and they only had one shot on target, a distance strike from Granit Xhaka which was not enough to beat goalkeeper Jan Oblak.