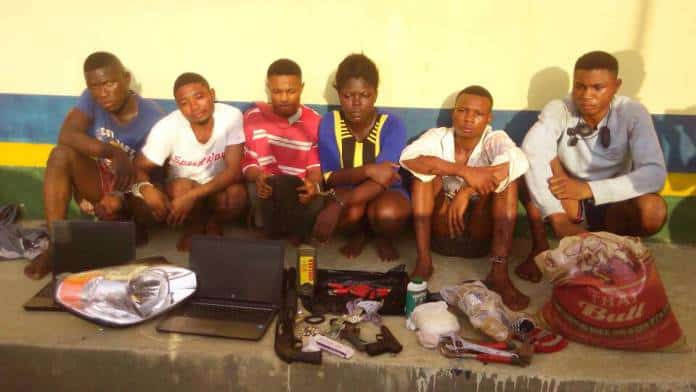 On 4th April, 2018 at about 0400hrs, in a coordinated operation following an actionable intelligence and cooperation of members of the public, the tactical Commanders and operatives from Igbogene Division, led by the Divisional Police Officer, raided the hideout of a criminal gang in Igbogene and arrested one Sunday Alo ‘m’ 22yrs, one Henry Goddy ‘m’ 25yrs, one Justice John Ukpaka ‘m’ 23yrs, one Choima Blessing ‘m’ 22yrs, one Favour Ojum 20yrs and one Justina Odua ‘f’ 23years.

It will be recalled that on 21/04/2018 at about 2130 hours, unknown gunmen intercepted a Bus-Amaxy Express Transport-with REG No. SAG 20 AT, at Glory Land Drive, Igbogene, robbed its occupants and kidnapped the Bus driver, the Bus was later abandoned by the armed robbers and the kidnapped victim was released on the 26th April, 2018. The recovered; new car headlight, new car side mirror, half bag of rice, assorted weavon, hair dressing items and two Wristwatches were among the items robbed from the occupants of the Bus.

The Command will intensify its operations on criminals and criminal hideout to ensure a safer Bayelsa for residents and investors alike. The Command is also appealing to members of public to continue to partner with the Police and provide useful information that will assist the Police to succeed.