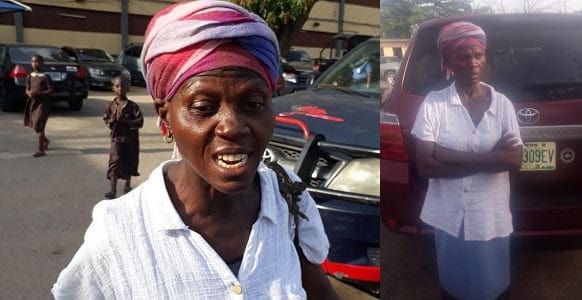 She Insisted That One Of The Victims, A 2-Year-Old Child, Was Her Missing 20-Year-Old Daughter

A middle-aged woman, Mary Henry has been arrested by policemen in Lagos for kidnapping two children in Yaba area of the state.

Henry, who lives on Akanni Street, Somolu, was said to have been seen with the kids Mukaila Ya’u, 10, and Mariam Jubril, 2, along Herbert Macaulay Way, Yaba.

Naija News learnt that Ya’u was sent on an errand around 10am yesterday, and Jubril had followed him. They were reportedly lured by Henry.

The woman was said to be absconding with the children when she was trailed and apprehended by a team of policemen from the Sabo division, led by the Divisional Police Officer, CSP Mary Ubangha.

The Commissioner of Police, Edgal Imohimi, said the woman ran into a church with the children.

He said, “The DPO observed the woman’s worried countenance and felt something was amiss. She decided to trail her. The suspect, however, noticed that she was under surveillance and diverted into Saint Dominic Catholic Church, Yaba.

“During interrogation, it was discovered that she was not the biological mother of the children, who are of different parents. Investigation into the case is ongoing.”

Imohimi added that the police are trying to track down the suspect’s brother who is believed to be her accomplice.

But the suspect, who was aggressive, said her daughter was with one Shitan.

She said, “I did nothing. You (the police) are making a false accusation against me. They arrested me for no just cause. God will bear me witness. My daughter, Ada, is with Shitan.”