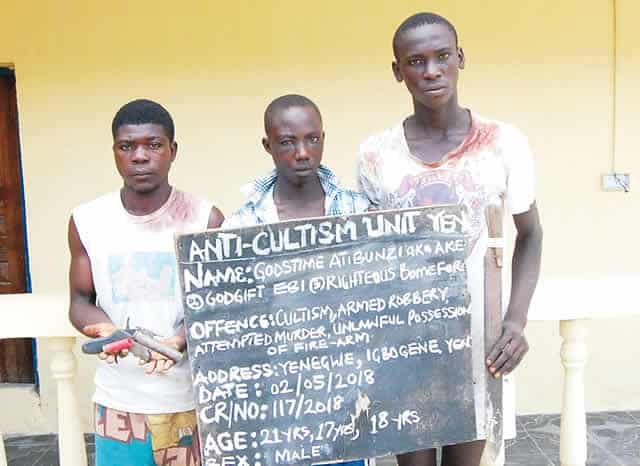 Three suspected cult members have been arrested by the Bayelsa State Police Command in Yenegwe, in the Yenagoa area of the state.

The suspects who were reportedly ringleaders of the Bobos cult, were apprehended by detectives attached to the Igbogene Police Division and their names are, Godstime Atiburuzi, 21; Righteous Bonnafor, 20, and Godgift Ebi, 18.

Further report into the arrest has it that one of the suspects, Atiburuzi, who wanted to escape, shot the police inspector who led the team that apprehended the cultist.

The inspector who survived the shot was taken to an undisclosed hospital where he is presently receiving treatment.

A source revealed that the suspects have been on the watch list of the police for a while, adding that while Atiburuzi was arrested on Monday, Bonafor and Ebi were apprehended on Tuesday.

The source further explained that the police in its effort to calm the operations of cultism in the state had doubled its efforts to apprehend ringleaders of cult groups.

He noted that the command had got the names of some cult members terrorising some areas of the state, adding that they would soon be apprehended.

Mr. Asinim Butswat, the Police Public Relations Officer, Bayelsa State Command, while chatting with newsmen, said Atiburuzi gave the police information that led to the arrest of the other two suspects.

Butswat, a Deputy Superintendent of Police, said, “On April 30, 2018 around 08.30am, detectives from the Igbogene Police Division, who were on the trail of a 21-year-old notorious cult member, Godstime Atiburuzi, sighted him at Yenegwe community in Yenagoa.

“In a bid to escape, the suspect (Atiburuzi) shot at a policeman, an inspector, on his left hand. Consequently, the other detectives with the inspector overpowered and arrested him. They recovered a locally-made single-barrelled pistol from the suspect.

“Upon interrogation, the suspect confessed that he was a member of the Bobos cult. He mentioned Righteous Bonnafor, 20, and Godgift Ebi, 18, as his gang members.”

Butswat said investigation was ongoing, adding that the suspects would soon be charged to court.