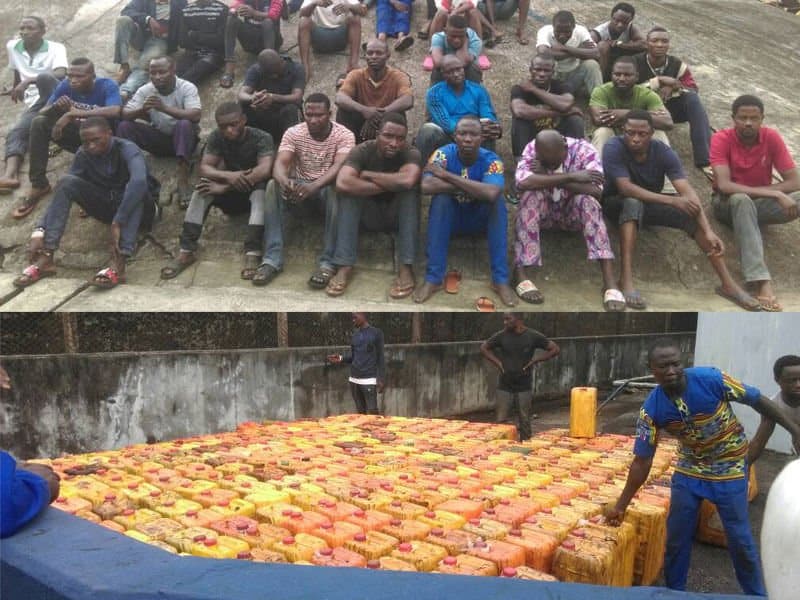 The Navy’s Forward Operating Base (FOB), in Igbokoda, Ondo State, has arrested 32 suspects for illegally siphoning and selling stolen AGO, thereby recovering stolen products and handed them all over to the police for onward prosecution.

Apart from the arrest of the suspects made up of drivers, marketers and loaders of the illegal products, 370 jerrycans of 30litres illegally refined AGO totalling about 11,100 liters, 13 vehicles, 31 phones and the sum of N3,199,000 were also recovered.

When contacted, the Command Information Officer, Western Naval Command, Commander Chinwe Umar, said the arrest was in line with the directive of the Chief of Naval Staff (CNS), Vice Admiral Ibok Ette Ibas.

Captain Sabo Lengaya, he Commanding Officer, FOB Igbokoda, who led the team said the suspects were arrested during a routine patrol of Igbokoda/Okitipupa road.

“Our patrol team intercepted a convoy of vehicles along Igbokoda/Okitipupa road and in the course of searching the vehicles, it was discovered that some were carrying illegally refined AGO in 30 liters jerrycans, while some jerrycans were empty.

“Further investigation revealed that they came from the creeks by boats and loaded at Ugbonla jetty. The vehicles with empty jerrycans were equally heading to the same jetty to load.

“Subsequent attempt to arrest those at the jetty proved unsuccessful as the jetty were deserted at the time our patrol team arrived.

“In addition, facts on ground also showed that the suspects were not licensed to deal in petroleum products .

“Consequently, 32 suspects including 30 males and two females were arrested. We recovered 370 of 30 litters jerrycans totaling 11,100 liters, as well as 1,139 empty jerrycans.

“We also recovered 13 vehicles including two buses filled with the illegally refined AGO, 31 various phones
and the sum of N3,199,000.” he said.

The navy handed over the suspects and all seized items to the Area Commander, Okitipupa, after approval from naval authorities, to ensure that thorough investigation is carried out and the suspect her adequately prosecuted.