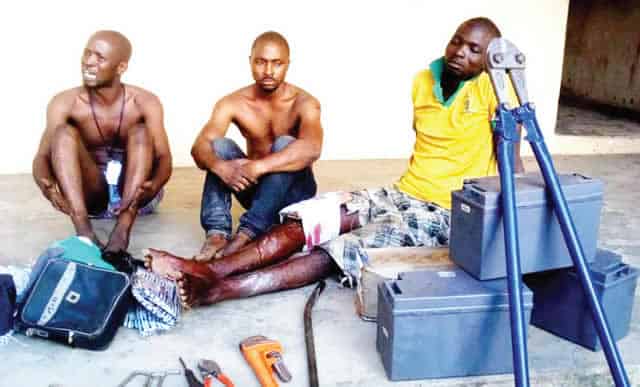 Three suspects have been arrested by the Ogun State Police Command for allegedly vandalising the mast of a telecommunications company, MTN, at Ode-Remo, in the Remo North Local Government Area of the state.

According to the police, the suspects names are Balogun Lukman, Sunday Kayode and Atanda Abiodun.

Abimbola Oyeyemi, the state Police Public Relations Officer, while speaking with newsmen revealed that the suspects were arrested on Friday, April 27, 2018, by a patrol team of the Ishara division of the command led by the Divisional Police Officer, Yusuf Taiwo.

Report has it that the suspects came in a blue Ford bus, with the number plate NRK 842 XA, and were sighted at the mast site around 2am with the vandalised parts of the mast, including three heavy duty batteries and cutters.

Oyeyemi said when the suspected vandals sighted the policemen, they took to their heels which led to the police giving the suspects a hot chase.

The police spokesperson said while three were arrested, two escaped.

“The state Commissioner of Police, Ahmed Iliyasu, has ordered a full scale investigation into the case. He has asked that the two fleeing suspects be apprehended,” he added.