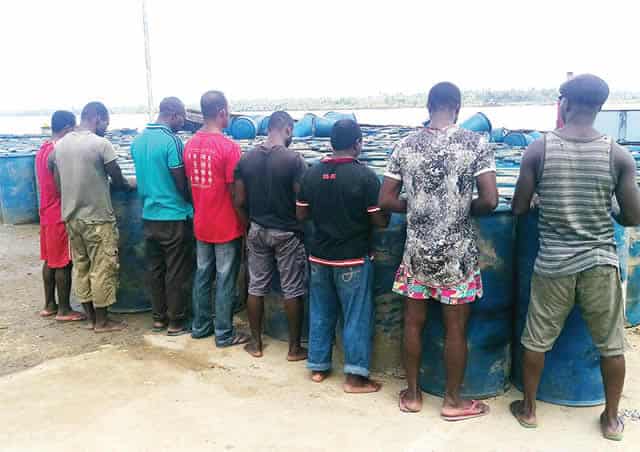 Nine suspects have been arrested by the Nigerian Navy Ship Victory in Calabar, Cross River State, for being in possession of 500 drums of illegally refined diesel.

Naija News learnt that the suspects were conveying the diesel on a large wooden boat from Bonny in Rivers State to Calabar when they were intercepted on April 22 along the Calabar channel.

Commodore Julius Nwagu, the Commander of NNS Victory, revealed this while handing over the items and the suspects to the Nigeria Security and Civil Defence Corps, (NSCDC), at the Naval Jetty in Calabar.

Nwagu said investigations revealed that the products were being taken to Calabar from Bonny in Rivers State.

He said, “We are here in line with extant regulations on arrest, prosecution and detention of persons who carry out illegalities in Nigeria’s maritime environment.

“I want to warn those involved in such acts that the Nigerian Navy will not fold its arms and see anybody sabotaging the efforts of the Federal Government in ensuring that the economic prosperity of this country is taken to a new level.

“In the three months of assumption of the command, I have brought five gunboats to support the gunboats we have. So, there is no hiding place for perpetrators of economic illegalities in our maritime environment.”

Nwagu stated that the arrest was the second in the last two months, adding that the navy would not watch while the nation’s economy was plundered.

He advised pipeline vandals and those engaged in illegal bunkering to desist from the acts.

“We cannot allow anybody to sabotage the efforts of government,” he added.

Receiving the nine suspects and the items, Mr. Haliru Usman, the state Commandant of the NSCDC, said the suspects would soon be charged to court at the conclusion of investigations.

“After preliminary investigations, we will charge them to court and the rest will be left for the court to decide. This illegality must stop,” Usman said.