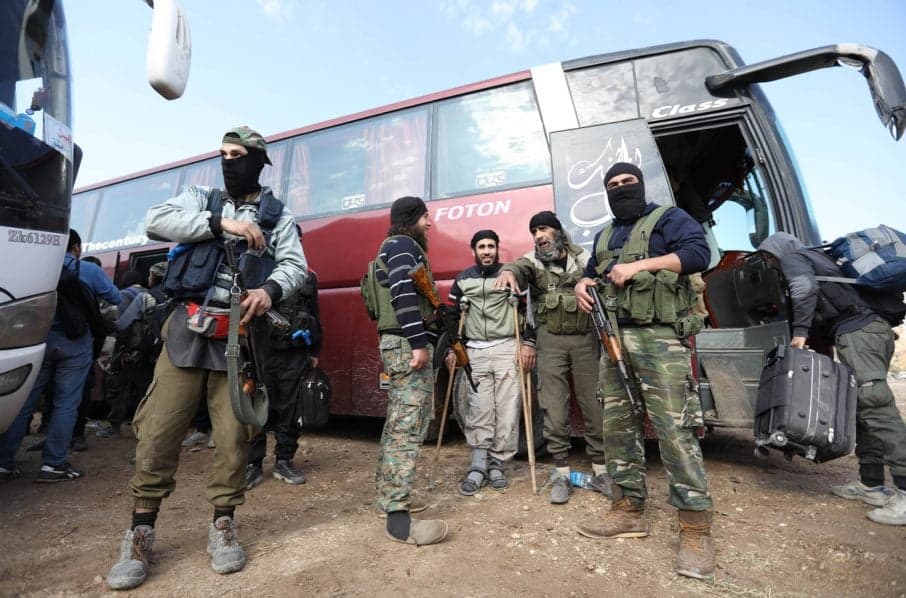 Dozens of jihadists have today, arrived in northern Syria under a deal with the regime for them to leave their enclave in southern Damascus.

The Guardian reports that the fighters from Syria’s former Al-Qaeda affiliate were transferred out of the Yarmuk district late Monday under a deal announced the previous day.

Early Tuesday, the Hayat Tahrir al-Sham fighters and civilians arrived in the northern province of Aleppo ahead of their transfer to the neighbouring province of Idlib.

In Aleppo’s Al-Eis area, the Nigeria News correspondent saw masked gunmen step off a bus and fire a volley of gunshots into the air before hugging those who had arrived to greet them.

In exchange, under the same deal, SANA said dozens of civilians had arrived in Al-Eis from various Shiite-majority areas in Idlib.

They included five patients and 18 people accompanying them from the besieged areas of Fuaa and Kafraya, along with 42 people from the area of Ishtabraq, where they had been held hostage since 2015.

For over a week, the army has been pressing a military offensive to retake Yarmuk and surrounding areas, where the Islamic State group also retains a presence.

On Tuesday, another Nigeria News correspondent saw regime war planes pound Yarmuk, once home to the country’s largest Palestinian refugee camp, as the battle against IS fighters there continued for a 13th day running.

The jihadists have held large parts of Yarmuk since 2015.

The regime launched its offensive there after pro-government fighters reconquered what was once the former rebel bastion of Eastern Ghouta east of the capital last month.

The Damascus regime has retaken large parts of Syria since 2015 with the backing of Russia, but most of Idlib province still lies outside its control.