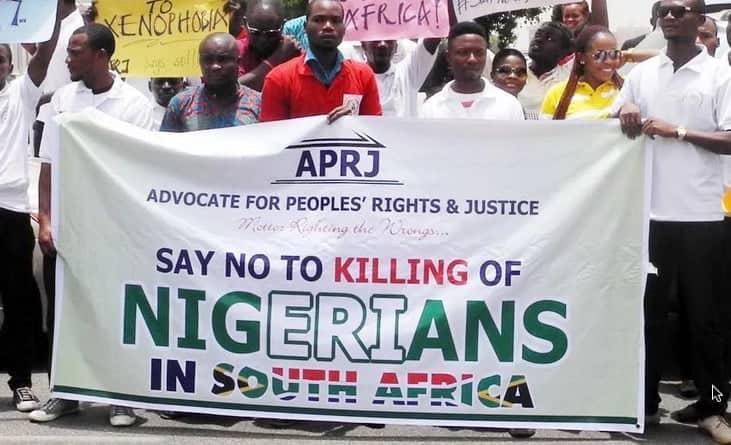 Nigerians Detained In South Africa Not Due To Drugs – Union

Mgbo said the union was worried by recent reports that the South African police detained the Nigerians because of drug-related offenses.

” This is absolutely false. Recall that during xenophobic attacks against foreign nationals in Rustenburg in the North West Province of South Africa, Nigerians recorded high casualty with so many properties destroyed.” Some members of the Nigerian community were killed by mobs. “All these made Nigerians in Rustenburg to mobilise and stage a peaceful protest against the killings and destructions.”

Mgbo said that in the process, the 14 Nigerians were arrested by the police and that they were still being detained.

According to him, the attacks in Rustenburg began when South Africans alleged that Nigerians sold drugs to a group that attacked taxi drivers in the city.

“They also alleged that a Nigerian abducted and raped a 16-year-old South African girl. ” On investigation, the union discovered that the allegations were false and we made the same report available to the police.”

He said, however, that the legal desk of the union was on top of the detention of the Nigerians and was working hard for their release, adding that the union was also following up on the recurring extra-judicial killing of Nigerians resident in South Africa.

It will be recalled that two Nigerians were recently murdered in the latest killing of Nigerians in the former apartheid enclave.

They are Mr. Clement Nwaogu, a native of Njikoka Local Government Area of Anambra, who was burnt alive by a mob in Rustenburg on April 22 and Mr. Thankgod Okoro, 30, from Ogbaku in the Agwu Local Government of Enugu State.

Okoro was reportedly shot at point-blank range by a member of the South African Police Flying Squad at Florida West Rand in Johannesburg on April 9.