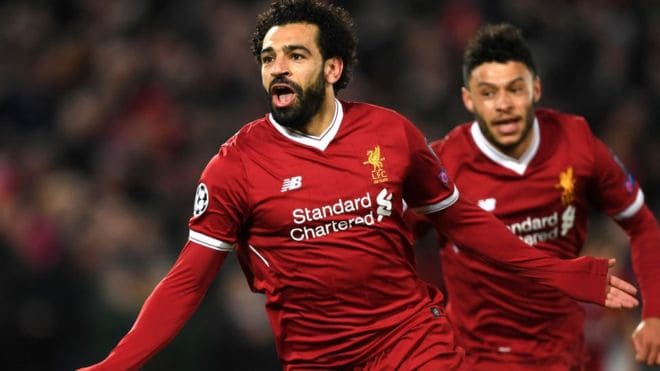 Its no longer news that Mo Salah has been scoring goals upon goals since the beginning of the season. He did it  again on Tuesday night during the Champions League semi-final match against Roma.

The Liverpool striker who was recently crowned as PFA Player of the Year scored two goals, he also assisted his team mates to score extra two goals against Roma.

The Egyptian international has score 43 goals this season now and this is the second time a team will score five goals in a semi-final match.

People always talk about the collaboration of Liverpool forwards – Sadio Mane, Roberto Firmino and Mo Salah – but the way the humilated Roma, even Roma fans start to cheer them after they score goal number five.
Liverpool fans were no left out as they sang and dance throughout the match
Don’t forget that it was the same Roma team that chase former European champions Barcelona from the competition.

Apart from the two goals that Salah score, Firmino also added two, and Mane added a goal
Roma managed to score two away goals at Anfield. All home is not lost and there is still a chance for the Italians to reach the final – don’t forget that Barcelona took a 4-1 advantage to Stadio Olimpico before Roma showed them who the boss was with three goals.