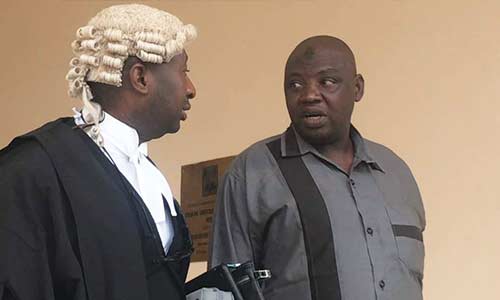 Justice Sherifat Solebo gave the order while ruling on the case of allegations of corruption preferred against him by the Economic and Financial Crimes Commission (EFCC).

Justice Yunusa was arraigned by the anti-graft agency on four counts bordering on an attempted perversion of the course of justice and corruption by a public official.

In the ruling which lasted for about two hours on Monday, Justice Solebo held that the National Judicial Council (NJC) had already exercised disciplinary action against the judge and the coast was, therefore, clear for him to face his trial.

She also dismissed the preliminary objections of the second defendant, Agbo and adjourned the case till June 11, 13 and 14 for trial.

On March 9, counsel to the suspended judge, Robert Clarke, had in a preliminary objection argued that his client had been absolved by the NJC of the particular charges before the court.

He consequently urged the court to quash the charges, but the EFCC through its counsel, Wahab Shittu, opposed this line of argument.

The prosecution insisted that part of the allegations against the defendant was unprofessional misconduct, interference with the cause of justice, and communication on a suit pending before him.

He further maintained that Justice Yunusa was not entitled to judicial immunity.

Part of the charges read, “Justice Yunusa attempted to pervert the course of justice by engaging in constant price and confidential telephone communications with a Mr Rickey Tarfa, SAN, during a period he presided over two of the senior advocate’s matter”.

The EFCC also alleged that the suspended judge received the sum of N750,000 from a Senior Advocate of Nigeria, Mr Nwobike.

In the fifth count, Agbo was charged with offering gratification of N1.5million to Justice Yunusa, in order to induce him to give decisions in favour of the Law Chambers of Rickey Tarfa.

The EFCC consequently arraigned Justice Yunusa, formerly a judge of the Lagos Division of Federal High Court, alongside Agbo in January 2017.