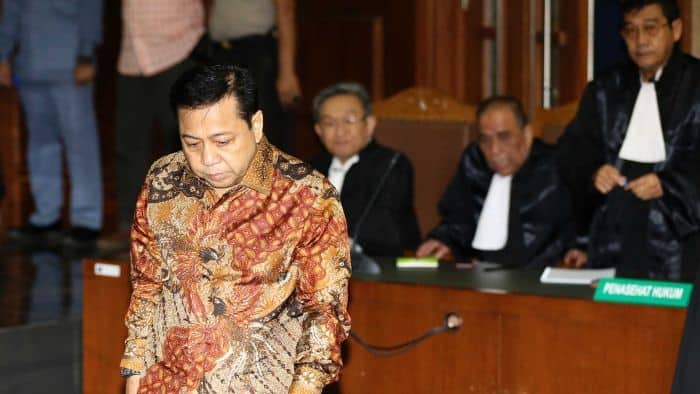 Indonesia’s former speaker gets 15 years in jail for corruption

Indonesia’s former parliament speaker, Setya Novanto, was handed a 15-year prison term today  in one of the country’s harshest sentences for corruption, marking a victory for its clamp-down on widespread corruption.

Novanto, once among the country’s most influential politicians, had been accused of taking millions in kickbacks and bribes linked to the national roll-out of government ID cards.

Novanto, who showed little reaction to the sentence, said he would “need time” to consider an appeal.

Novanto was then, the head of the Golkar party’s parliamentary faction.

The ally of President Joko Widodo has denied any wrongdoing.

The seasoned politician was arrested in November by the country’s anti-corruption commission after evading questioning for weeks, claiming ill health.

Prosecutors had sought a 16-year prison sentence for Novanto and demanded that he be barred from holding public office for five years after release.

Novanto had initially ignored summons by the Corruption Eradication Commission (KPK) and evaded an arrest attempt in 2018 by disappearing for a day, before being taken to hospital for injuries apparently suffered in a car crash.

Investigators picked him up at the hospital after doctors certified that he was fit for questioning.

KPK said total losses to the state as a result of corruption in the ID card project are estimated at 2.3 trillion rupiah (172 million dollars).