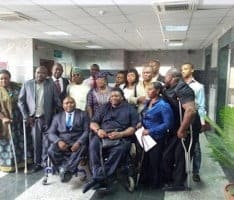 2019: EU Assures INEC Of Support For Persons With Disabilities

The European Union Centre for Electoral Support (ECES) has assured the Independent National Electoral Commission (INEC) of continued support to ensure inclusion of Persons With Disabilities in 2019 electoral process.

Naija News learnt that the  assurance was given today in Calabar by the ECES Project Director, Mr David Le-Notre, during the opening of a five-day BRIDGE training workshop for INEC Persons With Disabilities Desk Officers.

Le-Notre, who was represented by Mr Dominique Weerts, Senior Electoral Expert in ECES, said that ECES was committed to building the capacity of INEC personnel ahead of the 2019 general elections.

According to him, the workshop is organised to provide tools for participants to view elections from inclusion perspective and bridge the gender gap in the Nigerian electoral system.

“The aim of ECES in this workshop is to provide technical assistance to INEC with the aim of strengthening the commission’s capacity in delivering an inclusive, free and fair 2019 general election.

“Global statistics indicate that many people are living with various forms of disabilities across the world, with as high as 10-15 per cent of every population.

“The right to vote and be voted for is one of the most visible gains of democracy.

‘’Similarly, the right and freedom of PWD to equally participate in elections with others is provided in both local and international declarations. “The Constitution does not alienate PWD from voting and contesting, and hence, measures must be put in place to ensure that society does engage in this discriminate practice’’, he said.

Speaking, Dr Frankland Briyai, the INEC Resident Electoral Commissioner in Cross River said that the commission had since commenced an aggressive voter education across the country ahead of 2019.

Briyai, who was represented by Mr Benjamin Igwe, Head of Operations Department in the Commission, advised the desk officers to make judicious use of the training to acquiring new skills and enhance their proficiency.

He thanked ECES for partnering with INEC in the capacity building of electoral officers.

Ogunmola was represented by Mr Oluwole Osaze-Uzzi, Director of Voter Education and Publicity in the commission.

Ogunmola said it was a fundamental right of every Nigerian citizen, who is 18 years and above, to participate in the election process in the country.