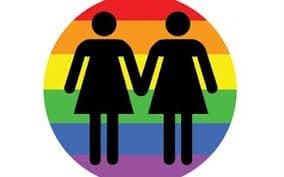 The baby who was born to the lesbian couple Chiara Foglietta and Micaela, who both reside in Turin, Italy is named Niccolò Pietro.

In her post on Facebook, Chiara Foglietta, said she had undergone artificial insemination in Denmark, through which she conceived their son, who was delivered last Friday.

Punch reports that When they wanted to register his birth upon their return to Italy, the Italian government refused, telling them, “Each child has the right to know their own history, the set of events that have generated it, and has the right to claim rights to those who wanted it.”

The refusal of their son’s registration means that the Italian government do not recognise the birth of their son.

“But in order to be able to record it at the registry office, I have to declare that I had sex before I conceived him.”

In Italy, fertility treatment is only available to heterosexual couples who are in “stable relationships.”

Chiara argued that there was “legislative vacuum” because the registry had relied on the 2002 ministerial decree.

She noted that “reality has to adapt to bureaucracy and not the other way around;” arguing that being told to say she conceived via heterosexual sex was akin to asking her “to declare false before the law.”

“It is for the children of single women and those with partners who have chosen medically assisted procreation with external donor and want to tell the truth,” Chiara argued.

She said her decision to confront the authorities was mainly to secure her son’s rights, and to also fight for “all rainbow children” and families who do not have the strength to face the battle as she has done.