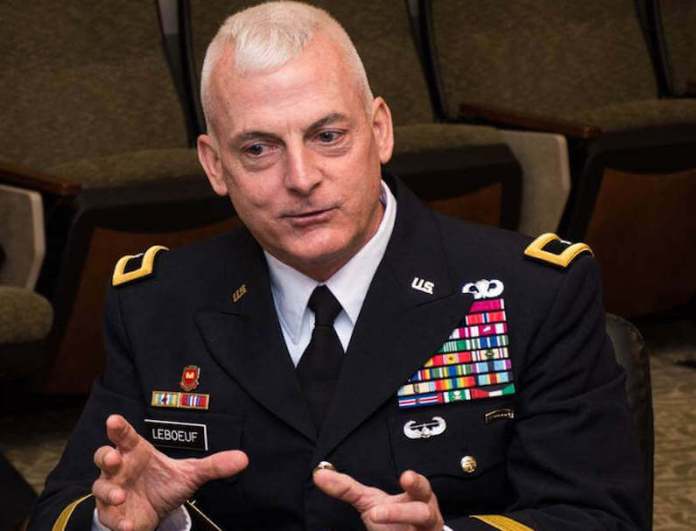 The Commanding General of the U.S. Army, Africa, Brig.-Gen. Eugene LeBoeuf, has said the U.S. military had set in motion a strategic plan to assist Nigeria and other nations within the region with reliable border security plans.

LeBoeuf, said this at the ongoing African Land Forces Summit in Abuja; where he further stated that  insecurity and terrorism in Nigeria and other West African nations have been fueled by the invasion of foreign extremists in the region.

He also noted, “to respect our security cooperation activities, we again will support border security activities through invitation to help support our African allies.”

“We are all concerned over attacks from foreign extremists’ orgainisation and so the U.S. is interested in supporting our partner nations to secure their borders and enabling security whether in their country or outside.”

He explained that the U.S. would continue to support Nigeria in strengthening its defence policy, which will be geared towards combating terrorism and extremism in the West African sub-region.

The Chief of Defence Staff (CDS), Gen Gabriel Olonisakin, observed that the need to combat terrorism, arms proliferation and extremism had become imperative given the wave of attacks in recent times.

He said: “Violent extremism terrorism, human trafficking, proliferation of small arms and light weapons as well as piracy have continued to pose security challenges to our individual and collective countries.

“The army chiefs of various countries including our partners need to develop and adopt a unified approach to confronting these challenges. Tackling security challenges such as those highlighted above requires a comprehensive decision and unified approach by all stakeholders.”

There is a need for sincere and active collaboration between all stakeholders to strangulate the sources of funding, weapons and groups that pose or have the potential to pose a security challenge at national, regional or continental levels. “This collaboration can only be possible if we forge lasting friendships that will accommodate common interests and aspirations to safeguard Africa.”

Chief of Army Staff (COAS), Lt.-Gen. Tukur Buratai, who was also present described the African Land Forces  Summit as a forum  that  will engender African senior military leaders and other army chiefs from across the globe on the continent to share experiences on global terrorism and to forge a common approach to combating transnational threats and crimes such as violent extremist organisations, terrorism, arms proliferation and piracy.

“Activities of violent extremist organisations such as Boko Haram, Al-Shabab, Ansarudeen and Al Qaeda in the Magreb have continued to keep our security forces busy but we are committed to ensure the safety of lives and property.”

“In this regard, I am delighted to inform you that Nigeria has recorded significant progress in taming the excesses of the Boko Haram terrorists group.” Buratai said.

The summit also had in attendance, the heads of armies of several African nations including Nigeria’s Chief of Naval Staff (CNS), Vice Admiral Ibok Ekwe-Ete Ibas, among other dignitaries.