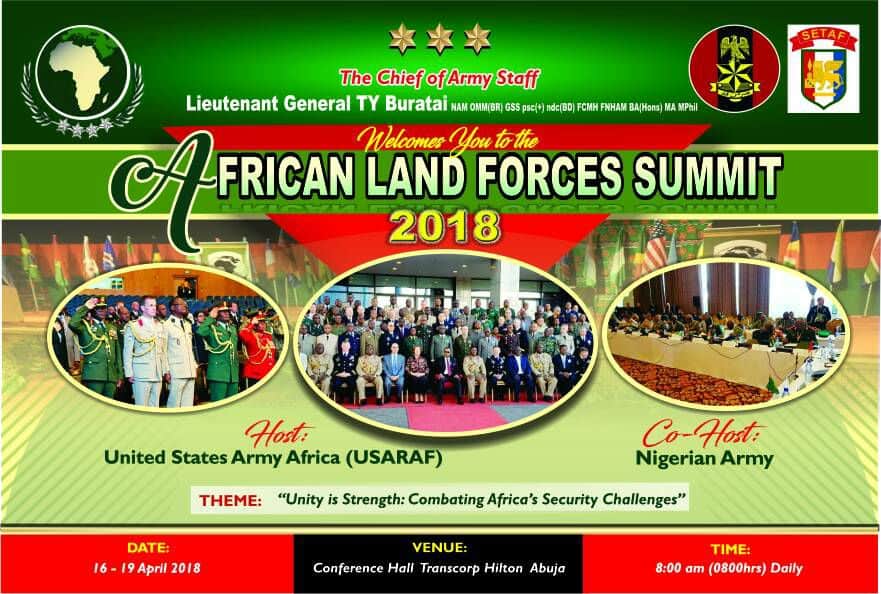 Military Commanders from across Africa on Monday, kicked off a conference been hosted by the Nigerian Army and co-hosted by the United States Army Africa (USARAF) aimed at boosting cooperation between countries fighting extremist groups.

Nigeria’s Chief of Army Staff, Lt. Gen Tukur Buratai, gave the keynote address at the event holding at the conference hall of the Transcorp Hilton hotel in Abuja, Nigeria.

Naija News learnt  that the conference known as The African Land Forces Summit, is targeted at bringing  together land force chiefs from across Africa for candid dialogue to improve security.

Naija News also understands that military leaders from almost every country on the African continent, including Angola, Cameroon, Egypt, Kenya and Rwanda  are in Abuja with the aim of discussing on how to curb security threats in Africa, from Al-Shabaab in the east to Boko Haram in the west.

The last edition of the African Land summit was hosted by Malawi.

The previous year’s African Land Forces Summit as well also brought together military chiefs all around the continent.