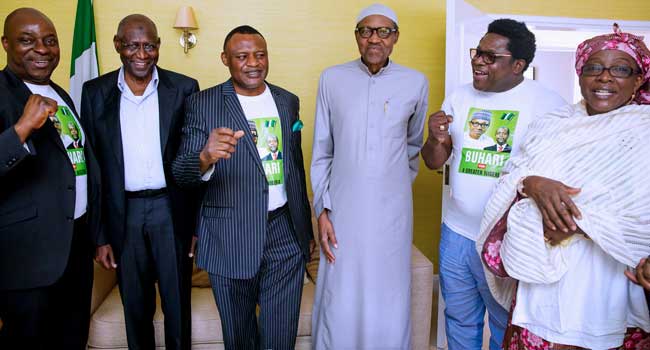 President Muhammadu Buhari has scored his administration high on Sunday, amidst growing allegation of non-performance citing the condition in which his administration met the country, allegedly without savings and the economy vandalised.

The President, according to a press statement released by his Special Adviser on Media and Publicity, Mr. Femi Adesina, said this while receiving some members of the Buhari Diaspora Support Organisation, led by Mr. Charles Sylvester.

Buhari said that past leaders have wrecked the economy of the country, but that his government was doing all in its power to find solutions to the problem of the country.

“Failure of some of the leadership we had in the past led to our not being able to capitalise on resources to improve the lot of the people,” the President said.

Punch report that Buhari said the damage done to the Nigerian economy in the years of plunder was massive, and that government was doing its best to recover some of the loot.

“If they had used 50 per cent of the money we made when oil prices went as high as $143 per barrel, and stabilised at $100 with production at 2.1 million barrels per day for many years, Nigerians would have minded their business.

“You could almost grow food on our roads, as they were abandoned. The stealing was so much, and they were so inept that they could not even cover the stealing properly.

“I wonder how all those things could have happened to our country,” the President said.

He specially appreciated  members of the Buhari Diaspora Support Organisation for deciding to identify with the country when they could have stayed abroad where they are comfortable.

Sylvester said that the members of the group were delighted by the level of the achievement of the Buhari government, as he prayed that the same God who healed the President when he was sick would grant him victory in 2019.

“You met a difficult situation, but you have overcome most of them. We are happy with the agriculture revolution, the ease of doing business, the anti-corruption war, the employment of youths through the N-Power programme, and the blockage of leakages in the public sector through the Treasury Single Account.

“We are proud of the speed with which you recovered the abducted Dapchi schoolgirls. It shows you as a worthy General.

“We are happy that you have declared for 2019. Majority of Nigerians are happy, but agents of corruption and darkness are unhappy.

“The same God who healed you when you were ill, will grant you victory in the 2019 elections. You are a General who does not fear combat, either with Generals or non-Generals.

“We declare our love and support for you. You are fixing the faulty foundations of our country and second term is when you will build the enduring structure.” He said.