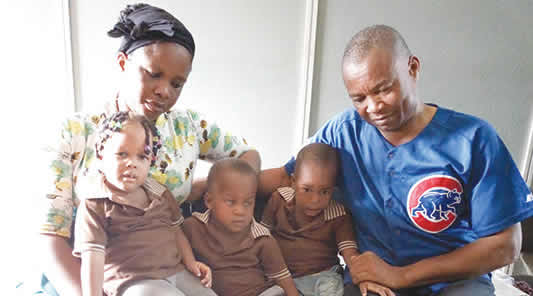 The couple with their triplet

Parents Of Triplets In Lagos Lament Of Hardship

The state of this country has caused a couple in Lagos state to lament over the burden of caring for their six children, including a set of triplets.

Prince, Praise and Precious, were reported to have been delivered in September 2015 after an agreement by the couple to stop giving birth.

Ifeanyi Amadu, the father of the triplets`lamented that after his wife delivered the triplets he lost his job .

Ifeanyi who is a native of Ukpo town, in the Dunukofia Local Government Area of Anambra State, said after a Toyota Sienna, which served as the family’s means of livelihood, was seized by officials of the Lagos State Traffic Management Authority in the Ajegunle area the situation was worsened.

He said his family had since then been living from hand to mouth.

He said, “We have had three children before now – Ruth (13), Chibueze (10) and Ebube (eight). We stopped giving birth to children. We just wanted to have fun that day when it turned to a pregnancy. We met a doctor who told us that she was pregnant with triplets.

“I was afraid; we didn’t expect it. I decided not to run away because of the love I have for my wife. Moreover, if I ran, who would take care of her?

“She was delivered of the babies through caesarean section. When the children were born, the girl had medical problems because the two boys rested on her in the womb. She could not eat. That again drained our resources as we sought medical help. During that period of taking care of mother and children, I lost my job at Idumota.”

The wife, Precious, said Ifeanyi was using the family’s vehicle for menial jobs when the minivan was impounded by LASTMA officials.

She said, “Some of my relatives took me and the babies to the village so that my husband could concentrate on using the vehicle to make some money. I was in the village in December 2017 when he called me and said the vehicle had been seized by LASTMA. I later learnt that the vehicle had a fault and he gave it to a mechanic, who parked it by the roadside where the LASTMA officials took it.

“When I returned from the village this year, we tried to get the Sienna back, but we were asked to pay about N70,000. We were told that the vehicle was in the LASTMA yard at Mile 2. We don’t have money to feed our children; where are we going to raise that kind of money?

“I tried to get a job, but the money they are offering me as an NCE holder is ridiculous. One private school proprietor that decided to help after listening to our predicament offered me N15,000. What will a family with six children and a husband without a job do with that?”

The mother of the triplet who is 40 years of age took time out to plead with the government to release the vehicle to the family on compassionate grounds, and also called for help from Nigerians for her husband to get a job.

Mahmud Hassan, the Public Affairs Officer of LASTMA, asked the couple to write a letter to the agency.

He said, “Based on your story, the vehicle was parked at a place where it was obstructing free flow of traffic and it was seized from the mechanic; it was not seized from the family. As an organisation, we will not allow anyone to violate the state traffic law because he is a third party.

“However, we also have human feelings in our organisation and we can understand what the family is going through. Ask them to write a letter to us on the matter and we could consider their plea.”