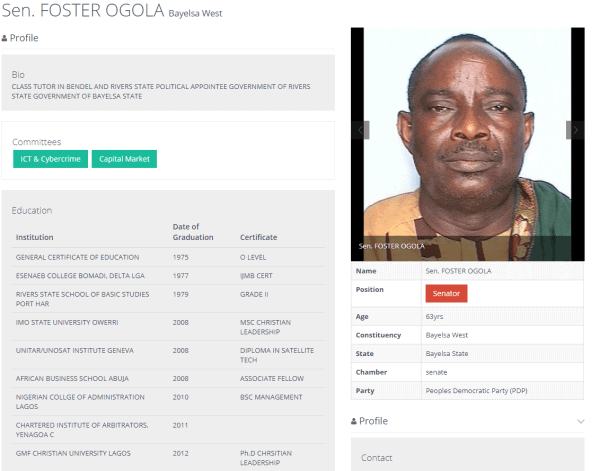 A Nigerian lawmaker, Foster Ogola, has taken his spot on the infamous list of prominent Nigerians with certificate scandals attached to their names.

A few weeks ago, a confidential report was made using the Leaks.NG platform hinting that the senator, currently representing Bayelsa West senatorial district, has fake credentials from an unaccredited university in Nigeria.

“Sen. Foster Ogola has a fake PhD. His official profile on the NASS Website says he has a PhD from GMF Christian University. There is no official site for the university and it is not accredited by the NUC. There is also no research paper or thesis to his name online. Although he got the degree in 2012,” the report alerted.

On his official National Assembly profile, the senator is credited with having a PhD in Christian Leadership from the GMF Christian University Lagos, the same course he reportedly has an MSc. in from the Imo State University, Owerri.

Naija News however learnt the  National Universities Commission (NUC), did not  licence the GMF Christian University, Lagos, where Mr Ogola claims to have earned his PhD from in 2012.

The  Director of Corporate Communications of the National Universities Commission (NUC), Ibrahim Yakasai, while confirming that validity of the institution said “We have never heard of that name,” .

Naija News also Learnt that  Mr Ogola, who is the Vice Chairman of the Senate Committee on Information Communication Technology and Cybercrime,was contacted on the allegation  of attending an illegal university and obtaining a fake certificate.
In response of his allegation, he said: “Kindly clarify for me if Premium Times does exist, to entertain allegations from third parties, whose identities are not mentioned, especially, when they are criminal in nature.”
Rather than answer the questions raised, the lawmaker stated that the allegations could be a product of “mischief makers with a potential to foment distraction from weighty matters of state.” On the unaccredited GMF Christian University, the senator was asked if there was an exemption from the NUC on the Christian Leadership course which Mr Ogola purportedly has a doctorate degree in.
“When did students or products of universities become accrediting bodies?,” the lawmaker said obviously not addressing the question.
A copy of the commission’s weekly bulletin provided by Mr Yakasai showed a list of 57 illegal universities operating in the country; GMF Christian University was not among, buttressing the fact that the commission is even not aware of its existence.