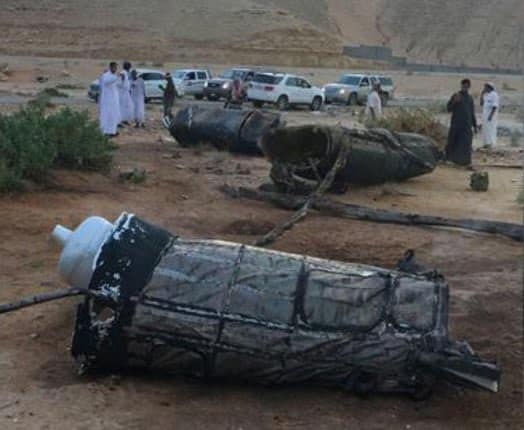 Saudi Arabia's air defence forces intercepted three ballistic missiles fired by Yemen's Houthis at Riyadh and other cities on Wednesday threatening to escalate a rivalry between Saudi Arabia and Iran.

The capital city of Riyadh and the southern cities of Jizan and Najran were targeted by Yemen's Houthis, stepping up it attack against Saudi Arabia in recent time.

According to reports, Houthis claimed that the Missiles were heading towards the defense ministry in Riyadh and a Saudi Aramco distribution facility in Najran.

This would be the fourth time that missiles have flown over Riyadh, as the Houthis step up efforts to demonstrate they can reach the Saudi capital.

Last month, a man lost his life in Riyadh by debris after the military shot down a flurry of missiles, the first casualty of the Yemen war in the Saudi capital.

Wednesday's missiles followed the downing of two Houthi drones earlier in the day in Jizan and the nearby Saudi city of Abha, the coalition said.

The Houthis said they were targeting an Aramco facility in Jizan, but the company said its facilities there were operating "normally and safely".

The Houthis militia claims that it was retaliating Western-backed coalition attack on Yemen targets.

The Kingdom's news agency SABA recorded 4 deaths including a woman and a child, and 10 others wounded in two air strikes on Wednesday in the Razih district of western Saada province.

News Agency of Nigeria reports that the coalition has launched thousands of air strikes in Yemen which have hit schools, markets and hospitals, killing hundreds of people – though it says it does not target civilians.

An alliance of Muslim states, led by Saudi Arabia intervened in the 2015 Yemen Civil war when the Houthis sent to exile the internationally-recognized government into exile in Riyadh.

Naija News understands that Iran has been accused by the Coalition of arming and supporting the Houthis-  charges the group and Tehran deny.