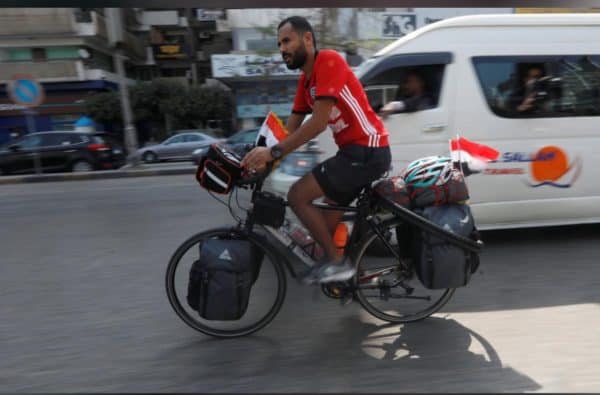 Mohamed “Ibn Nufal” Nufal, an 24 years old Egyptian has set off from  Cairo’s Tahrir Square for the World Cup in Russia – on a bicycle.

Nufal intends to get there through Jordan, Bulgaria, Romania, Moldova and Ukraine. He will fly over Syria due to the civil war there and will also give Iraq a miss for security reasons.

“It is about the road more than the arrival,” he told Reuters Television. “If it were just about the World Cup, I would take a plane. It is a great chance for me to see new things.”

Nufal Packed spare parts, an extra phone, batteries camping gear and other items that he might be needing while on the journey. In addition to his tent, Nufal will put up in hostels where he can find them, as well as relying on the kindness of strangers for a bed for the night.

Nufal was escorted by cyclist and groups of friends as he started his trip on Saturday, and he hopes many more will offer him help along the way.