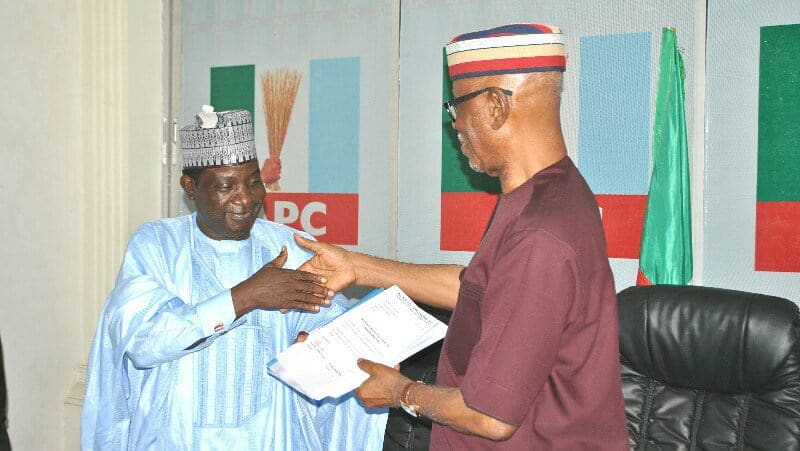 A technical committee set up to advise the National Executive Committee (NEC) by the All Progressives Congress (APC) on the controversial tenure elongation matter has submitted its report, even as it recommended that a national convention should be held. Naija News Understands

The receipt of the report came just as the Kano State Governor, Abdullahi Umar Ganduje, has said that the earlier decision of NEC which favoured tenure extension would be reversed at Monday’s emergency meeting of the APC National Executive Committee.

Naija News however, gathered that the committee’s  recommendations  headed by the Governor of plateau State Simon Bako Lalong aligned with the earlier resolution reached between governors and the National Working Committee that there should be Congresses and national convention instead of tenure elongation.

A source who was privy to what transpired during the committee’s sitting revealed that the decision of APC governors to support President Muhammadu Buhari’s decision influenced the recommendation as they did not want the issue to further divide the ruling party.

While presenting his report yesterday, the Chairman of the Committee and the governor of Plateau State, Simon Lalong, told the National Chairman, John Oyegun, that he hoped the recommendations would be acceptable to all the stakeholders of the party.

He said that if the report of his committee was followed religiously, the issue of leadership logjam in the ruling party would be a thing of the past.

Lalong said: “The task appeared not easy when it was given to us but with God on our side and the very wide consultations we made, this report has solved most of the problems that we were thinking was within the APC. So, that is to tell you that there is democracy in the APC.

“We looked at the meeting of February 27; we looked at also the passion and the commitment of Mr. President towards keeping the party one and also cohesive and so at the end of the day, we made far reaching recommendations. We noticed that there were different interests, which is quiet usual when you have a party like this that is progressive and those interest were genuine but at the end of the day, we were able to marry those interests so that the party can move forward. So, in this report, you will see a lot of it.

“The report will also contain recommendations of certain issues that we think the party should do immediately. And one of them you have already started. That if these recommendations are going to be useful within the shortest time, the party must summoning a NEC meeting.

Already we have received notices of NEC meeting for Monday which is also in line with our recommendations and we want to assure you that at the end of the day, APC is coming back to life.”

Responding, APC National Chairman Chief John Oyegun, while appreciating the committee said: “Finally the recommendations of your report will lay to rest the ghost that has been hovering over the leadership of APC.”

Meanwhile, Kano State Governor,  Ganduje, has revealed that the earlier decision of NEC which favoured tenure extension would be reversed. The governor also said that the few APC governors who were campaigning for what he described as “illegal” tenure elongation had been convinced to see reasons why such should not be.

Speaking with journalists in Abuja on Friday, Ganduje also disclosed that Monday NEC meeting was expected to decide on date and time table for Congresses and convention of the party which will brings in new set of leaders at all levels.

“Yes, there was controversy on this even though yesterday we were able to put it at rest. But let me tell you the issues involved, those who are advocating for tenure elongation, they are advocating on the premise that when we hold congresses and convention according to their own perception, there will be a lot of problems and that problem will linger into election period. Well that is a perception, it could be that way and it could be that some people wanted to retain power. Therefore that reason biased.