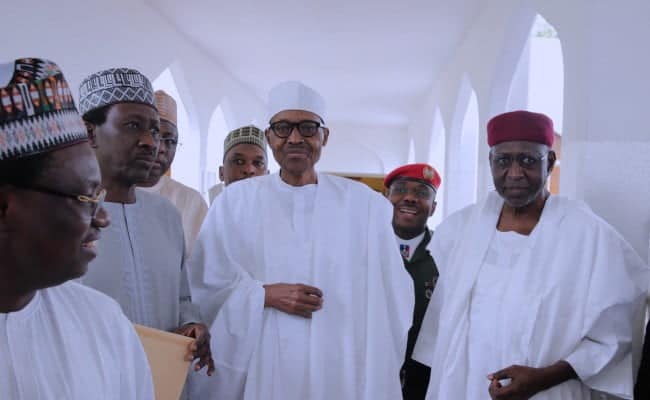 President Muhammadu Buhari has condoled  with the family of late Sen. Mustafah Bukar, who died on Wednesday in Abuja.The late Senator represented Katsina North Senatorial District before his death following an illness.

Naija News Learnt  that Buhari, who arrived at the residence of the late senator as 6:00 pm on Friday, said the deceased was his very close ally “in difficulties and in joy.”

“His death has deeply touched me personally and officially,” the President said, adding that Nigeria would miss the wisdom and political sagacity of Bukar.

Buhari prayed fervently for the repose of the soul of the deceased and urged the family to bear the irreplaceable loss. He described Bukar as humble, honest hardworking and God fearing personality who placed national interest above all other considerations.

“He played politics with decency, decorum and understanding; his death is a personal loss to me and the nation in general.”

Responding, Abdullahi Bukar, elder brother to the deceased, thanked the president and said the family was very appreciative of the visit.

President was in company of the Governor Katsina State, Aminu Bello Masari as he plans to depart Daura on Monday