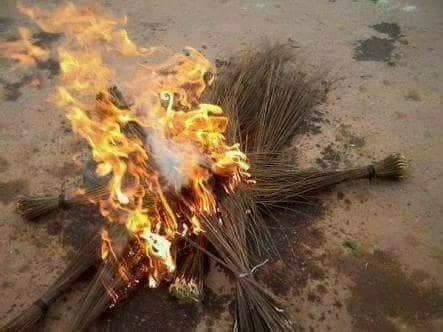 APC Lawmaker Burns Broom As He Decamps To PDP

Ahead of the 2019 election in the country, a three-time House Of Reps Member, Hon. Herman Hembe from Benue state who was recently sacked by the Supreme court, has announced his return back into his former party, the Peoples Democratic Party (PDP) together with thousands of his supporters.

Recall that as reported by Naija News in earlier reports, Hon. Herman Hembe was sacked from the House of Representative and replaced with Hon. Mrs Dorothy Mato by the Supreme court last year following a ‘failed’ primaries.

Decamping back to the party he said;

I have finally come back home after an unbearable rigmarole in my political sojourn with the strange APC, thank you, my people of Jechira-Barr Herman Hembe, he said.

Hon. Hembe, according to his admirers is amongst lawmakers from Benue state who have worked for his people especially from the zone A axis.