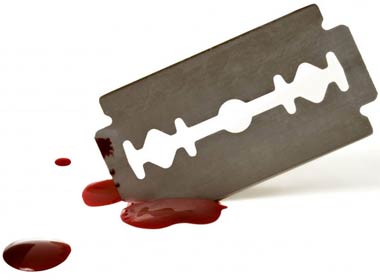 Nunu Allround, a thirty-year old woman, has allegedly slit the throat of her thirty-two-year-old lover, Obagie Ikede for seeking to end their three-month-old relationship at Amukpe Area in Sapele Local Government Area of Delta State.

Obagie Ikede is reported to be currently battling with his life at an undisclosed private hospital in Sapele. Report had it that the lovers have been dating for the past three months.

It was learnt that Nunu allegedly slit her lover’s throat with a sharp razor blade at night when he went to confront her in a friend’s house that she was planing to attack his new girlfriend.

Prior to this time, it was gathered that Nunu has been very aggressive each time she visits Obagie and sees another girl in his apartment. In some instances, she would shout or threaten to maim the girl and her boyfriend, Obagie.

A police source within the area said the matter has not been reported to them. When contacted, the Delta State Acting Police Public Relations Officer, DSP Andrew Aniamaka did not pick or return calls put accross to his mobile phone.