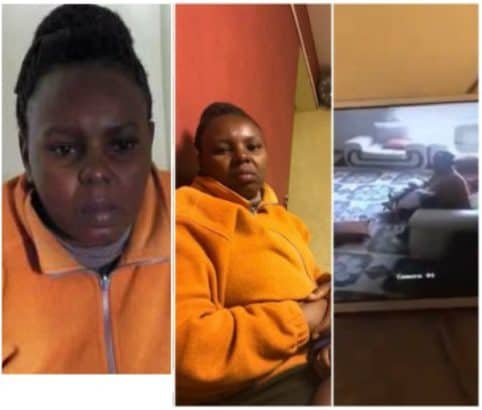 Cecile Ngumbo who is a house help and said to be 35 years of age, has been arrested after she was caught on camera assaulting and feeding her employer’s 15-month-old baby with vomit, has been charged to a court in Kenya.

Cecile was confronted by her employer and she took turns to denie the allegation against her relating to the happening on March 14, 2018 at Ngara estate in Nairobi, but was later arrested after a report was made by the 15-month-old’s mother to the police.

Police revealed to the court that the suspect was arrested, after she was captured by the CCTV cameras in the house,the house help was said to have also kicked and punched the baby.

However the househelp pleaded for mercy, claiming that she is the breadwinner for her three children as the matter was adjourned till April 4. Cecile first sparked public outcry, after a video of her beating up and stepping on the child surfaced on social media on 16th March, 2018.

The distressing footage shared in popular Facebook group Kilimani mums by a user whose handle read Millicent Njeru, purportedly the child’s mother, shows the nanny slapping, pinching and even kicking the child on the head.

“This is what my baby has been undergoing through” she wrote on the page. Saadia Ogle who also shared the video of the Kenyan househelp, warned mothers to be careful of who they leave their children with. She wrote;

These are footages of how a 1 yr old baby was physically abused by her care giver yesterday and day before in Nairobi. The bitter woman ako kwa cell and the case will be mentioned tomorrow. Baby has been checked by doctor thanks to God she is okay

Mums please be careful of whom you employ to take care of your children and always install secret cameras.