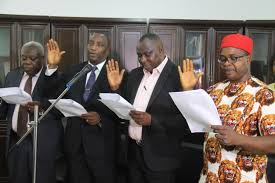 Anambra State Governor, Willie Obiano, has made his first set of appointments days after taking the oath of office for his second tenure. Naija News learnt

The Governor assured the people that his second term would witness improvement in the provision of infrastructure, entrepreneurial development and agriculture.

Former Senior Special Assistant to the Governor on Media, Chief James Eze was also sworn in as the Chief Press Secretary.

Performing the swearing in, Governor Obiano reminded the principal officers of the need to be dedicated in their duties to ensure that they contribute meaningfully to the success of his government.

He charged the new appointees to live above average, pointing out that he wouldn’t hesitate to fire anyone found wanting in the discharge of their duties.