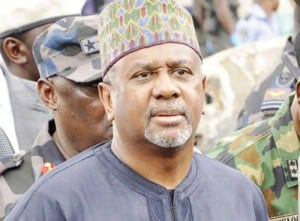 The on-going trial against the former National Security Adviser, Sambo Dasuki, who allegedly was involved in money-laundering, has been adjourned by a Federal Capital Territory High Court till May 2 and 3 for definite trial.

A Judge of the Court, Justice Husseini Baba Yusuf made the new trial date known in Abuja after the Supreme Court judgement of March 2, 2018 which ordered a quick hearing into the case.

However, to ensure effective management of the two separate charges against Dasuki and other defendants, the court fixed April 13 for a pre-trial conference to be attended by seven Senior Advocates of Nigeria (SAN) involved in the case so as to enable them take common positions on documents from the prosecution and those from the defendants.

During the Conference which will be presided over by Justice Baba Yusuf, all documents that are not contentious will be admitted from the bar while the contentious ones are to be tendered during trial to ensure speedy hearing of the cases which was filed in September 2015.

Senior counsels involved in the matter, especially Mr. Rotimi Jacobs for prosecution, Ahmed Raji, Akin Olujimi, Olajide Ayodele, Kayode Olatoke, Hakeem Afolabi and Solomon Umoh who are standing for different defendants in the trial all agreed with the Supreme Court decision for accelerated hearing and the pre-trial conference to sort out all the contentious issues.

Ahmed Raji who led the legal team of Dasuki had told the court that the decision of the Supreme Court indicated that the Economic and Financial Crimes Commission (EFCC) is different from Department of State Security Service (DSS) and that both are not serving the same government.

Although the charges was filed in 2015 proper trial could not commenced due to the failure of the Federal Government to allow the principal defendant in the matter, Sambo Dasuki to enjoy the bail and other bails granted him by different courts since 2015.

In the bid to enforce the bail order, Colonel Dasuki had approached the court of appeal and Supreme Court to compel the Federal Government to allow him go on bail as ordered by the trial court, just like other defendants, to enable access his lawyers and prepare for his defense as required by law.

However, both the court of appeal and the Supreme court had in their separate judgement disagreed with Dasuki that the Federal Government did not obey the bail order.

The two court held that since his bail at the Kuje Prison was endorsed by the Controller of Prison and was released before he was re-arrested by another of the federal government, the bail had been obeyed at that level.

With the new Supreme Court decision, especially on accelerated hearing, full scale trial is now expected to commence on May 2, 2018. Justice Baba-Yusuf in his brief comment had appealed to the senior lawyers involved in the matter to cooperate with one another, especially with the prosecution to allow the trial to flow so that Justice of the case can be met within a reasonable time.

The judge said that as minister in the temple of justice, the senior lawyers should do away with sentiments and do their jobs as legal practitioners of reputable standing in the interest of justice for both parties.

At the proceeding, apart from Sambo Dasuki, former Governor of Sokoto, Attahiru Bafarawa and former Finance Minister of State, Bashir Yuguda among others were all present in court to answer the charges against them.