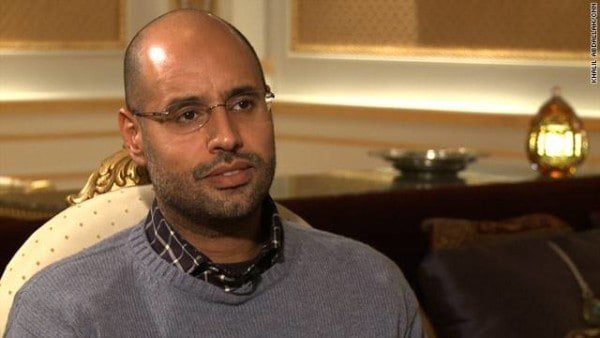 The second son of ex-Libyan leader late Muammar Gaddafi, Mr. Saif al-Islam Gaddafi has indicated his interest to be the next leader hat would unify the strife-torn country.

Politically fragmented Libya goes to the polls later this year to get a leader that would unify the country.

Saif who is reportedly inside Libya since his release will in a matter of days appear on television to pitch his presidential ambition before voters.

Saif’s manifesto is reportedly revolving around a clarion call for administrative reforms, national reconciliation and the building of a modern state.

The 45-year-old who was never part of his father’s administration had an arrest warrant from the International Criminal Court over his head over his alleged role in the bloody persecution of political opponents.

He was widely regarded as a potential successor to his father, a theory which he had severally attempted to debunk.

With Libya still blighted by a deadly civil war shortly after his father was killed, Saif was captured in the south of the country by militiamen originating from Zintan.

While being held in Zintan, he was sentenced to death four years later by a Tripoli court in a trial in absentia.

He was released from custody in June 2017, and continues to live in Libya, although his exact whereabouts remain unknown.

Since the overthrow of his father in an armed uprising in 2011, Libya has been caught up in a struggle for control by two rival governments based in Tripoli and Benghazi.

A UN-funded election is expected to take place toward the end of 2018. (NAN)

Meanwhile, The Nigerian Government says it is doing all it can to get Nigerians in Libyan slave camps back to the country