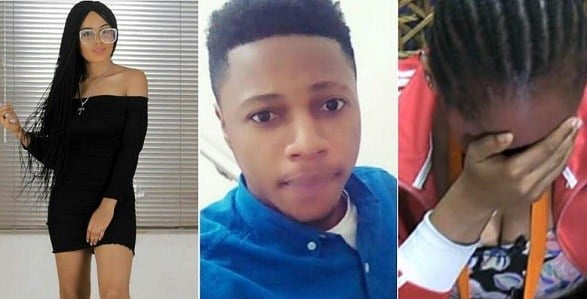 Nina’s boyfriend reaches to her after she broke down in tears in the house. (Photo credit: Naijaloaded.com)

Nina’s boyfriend seems not to be done with his lover even with her involvement with Miracle in the Big Brother Naija house. He took time to reach out to her after she broke down in tears recently.

The big brother Naija housemate yesterday broke down in tears during her diary session, and revealing her feelings to the big brother on how she’s not being treated fairly in the house.

This is coming after she had a fight with Cee-C two days ago over how she shares the house food. Her boyfriend, Collins has now reached out to her with this sweet Instagram post.

“When the going gets tough, the tough gets going, you gotta roll with the punches…don’t be intimidated by nobody..keep it pushing, you can get past this situation and become stronger, confident and wiser”

Earlier on, it was reported that Collins deleted all photos associating him with the housemate after video of her having sex with Miracle went viral over the internet.

There were rumours that Collins was totally done with her. But Nina shocked the viewers of the Big Brother Naija show when she requested to have a phone.

She was asked whom she wanted to speak to by Biggie and she responded saying her boyfriend. She was however blasted by Nigerians for her lackadaisical attitude towards the supposed relationship she is having with Collins.