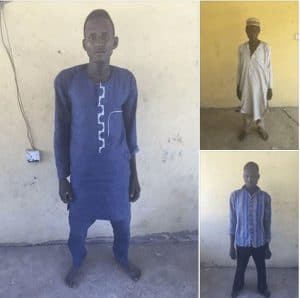 The Nigerian Army has announced the arrest of a wanted Boko Haram terrorist, Bubayi Isa from Biu local government area of Borno state.

Isa, is listed as number 37 in the list of wanted Boko Haram terror suspects published by the Army Headquarters.

According to the army, Isa was arrested alongside two other suspects – Muhammad Buba and Abdullahi Abubakar, while another suspect, Yakubu Abdullahi, who hails from Sabon Gari Gado in Bayo Local Government Area of Borno State, was also arrested, following a tip off.

The suspects have confessed to criminal activities levelled against them after preliminary investigations.

This information was made available by Director, Army Public Relations, Brigadier-General Texas Chukwu, in a statement which was obtained by Naija News.

“Further investigation reveals that Bubayi is the 37 suspect on the list of Boko Haram Terrorists suspect published by Army Hqs. Others arrested with him are Muhammad Buba & Abdullahi Abubakar from the same area while Yakubu Abdullahi hails from Sabon Gari Gado also in BornoState.”

“The suspects were arrested in Kalaa village in Hong LGA of Adamawa State. The suspects have also confessed of belonging to a Boko Haram Terrorists group and their various involvement following a preliminary investigation by the troops.”