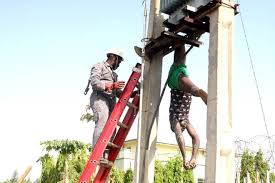 Pandimonum was let loose, when a man, simply identified as Henry, in his 30s, who was electrocuted in an attempt to steal from a live transformer supplying power to a telecommunication mast in  Barnawa High Cost Estate in Kaduna South Council of Kaduna.

The dead man was believed to be on an electric pole to cut a cable, technically called G&P, valued at N380, 000, when he met his waterloo, thereby throwing the residents into sudden blackout throughout the night.

The Guardian reports that the dead suspected cable thief, according to residents of the area, he was working in a block industry as a security guard and at the same time providing security for the same mast he was trying to disconnect.

Area Manager of Kaduna Electric, Barnawa area office, Yahaya Sunday believe that the victim might have been electrocuted around 11 pm when the area suddenly experienced power cut.

“We have suffered several vandalisation of our installations and most times, people tend to blame our staff for most of the theft, which is not completely correct.

“We call on the people to always pass across information to security and relevant authorities in any case of suspected movement of persons around our installations.” He said.

Abdulazeez Mukhtar, the youth leader of Barnawa urged youths to shun all forms of social vices and criminality that could lead to their untimely death.