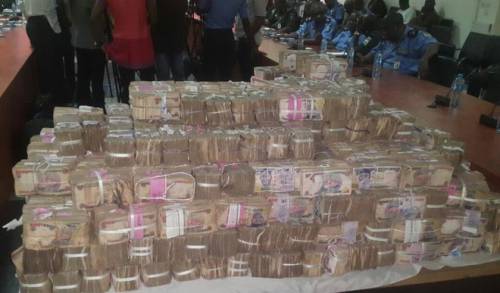 The Economic and Financial Crimes Commission (EFCC) has  dragged two Independent National Electoral Commission (INEC) staff in Kwara State, Christian Nwosu and Tijani Nda Bashiru before an Ilorin High Court, over alleged criminal breach of trust in respect of N817.6 million entrusted to them in their capacity as public officers.

Tijani Nda Bashiru was also charged with criminal breach of trust in respect of total sum of N77 million, while Christian Nwosu was accused of misappropriating N4.9 million. The accused  were said to have committed the offence between February 27, 2013 and 2015 and did that while in the employment of the INEC, Ilorin contrary to and punishable under Sections 97, 315, 308, and 309 of the Penal Code.

The accused, however, pleaded not guilty to the charges preferred against them.

The counsel to the EFCC, Rotimi Oyedepo, told the court the list of eight witnesses he intended to call for evidence, including one Abdulrahman Adebayo Abdulganiyu, who he said would give evidence of how his bank account was allegedly used to warehouse the proceeds of the alleged offences.
While making oral application for bail, counsel to the defendants, Obinna Okereke and Nelson Imoh, prayed the court to grant the  accused bail, saying that the offences with which they were charged are bailable .The counsel, who also said that the defendants had been in the EFCC custody since February 7, 2018, added that they were rearrested in Lagos court.

Opposing the bail application, prosecution counsel said that the accused may obstruct course of investigation, considering evidence he had against them. Justice Sikiru Oyinloye later granted each of the accused bail in the sum of N50 million with two sureties each in like sum.

The court also ordered that the defendants should be remanded in prison custody, pending when they meet the bail conditions. The matter was adjourned till 26 and 27 of April, 2018 for hearing.