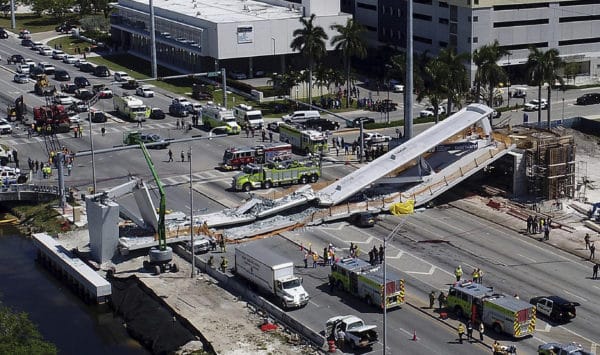 As investigators continue to search the site of a deadly collapse involving a 950-ton pedestrian bridge near Florida International University in Miami Thursday, officials say the death toll has risen. Naija News Understands

Early Friday morning, the Miami-Dade Police Department confirmed that six people have died as a result of the collapse.

“This has turned into from a rescue to a recovery operation,” Det. Alvaro Zabaleta said.

Ten others were taken to Kendall Regional Medical Center from the site of the collapse, with two being listed in critical condition when they arrived. One person died at the hospital. Officials have not confirmed if it was one of the 10 taken there or if it was someone who was brought in themselves.

The governor of Florida, Rick Scott, and the junior senator for the state, Marco Rubio, joined other officials at the scene. Rubio said the public and the families of the dead and injured deserve to know “what went wrong”.

The governor also  promised a concerted effort to “hold anybody accountable if anyone’s done anything wrong.”The National Transportation Safety Board sent a team of investigators to the site to look into the cause.But, Scott said, the most important matter for now was to pray for the people who are recovering and for the families of those who have died.

Robert Sumwalt, the chairman of the National Transportation Safety Board, said a team of specialists would begin its investigation today.

U.S. Sen. Marco Rubio, R-Fla, also  said that before the collapse, the new bridge had inspired a sense of pride within the community.Rubio  who said he has worked as an adjunct professor at FIU for about 10 years — called the disaster “troubling and tragic.”