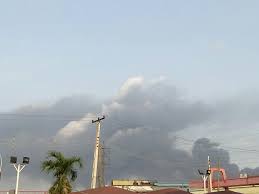 Smoke from Olososun Dumpsite In Lagos

Heavy smoke from fire which mysteriously  caught the Olososun dumpsite is said to have caused more havoc as three pupils of Ikosi High School, Ketu, have reportedly collapsed.

Recall Naija News Reported that the pollution, which began on Wednesday after a fire outbreak at the site, has forced many residents and business owners to run for safety.

Today, 16 March, pupils of  Ikosi, primary and secondary school, were seen rushing out of their schools and going home due to the heavy smoke, as directed by their teachers who feared the havoc it could cause to their health.

A Senior Secondary School 2 pupil of IHS named Lateef revealed that three pupils of the school collapsed yesterday and were rushed to the hospital for medical attention.

Apart from IHS, other schools where pupils were released to go home on Thursday and Friday as a result of the heavy smoke include Ikosi Junior High School, Ikosi Primary School and Express Nursery and Primary School 1 and 2.

A teacher in one of the schools, who asked not to be named, said academic activities have been seriously affected as a result of the situation.