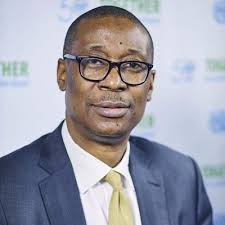 T
As President Muhammadu Buhari joins other African heads of state and governments in Kigali, Rwanda to sign agreement for the take-off of Continental Free Trade Area (CFTA) on March 21, the Federal Executive Council (FEC) today 15 March in Abuja are bidding for the location of headquarters.

The Minister of Industry, Trade and investment, Dr. Okechukwu Enelamah, while addressing journalist at the FEC meeting, said Nigeria’s trade capacity which he said had hitherto been between 13 and 15 per cent, would be boosted by the framework.

He explained that the decision to establish CFTA was agreed upon in 2012 by all Heads of State and Government of the African Union (AU) at their 18th ordinary session held in Addis Ababa, thereafter noting that it is the first step in the implementation of AU Agenda 2063 meant to build an integrated, prosperous and peaceful Africa.

He said the move to bid for headquarters of CFTA by the federal government was because the country is remarkable for its leading roles in negotiation process, pointing out that it was the belief of FEC that it was better to be a leader by being the host nation than being a mere follower.

“In terms of what was approved in council today, the council approved for Nigeria to sign that agreement establishing CFTA in Kigali on March 21st which will be signed by our president at an extraordinary session of the AU. It also approved for Nigeria to express an interest in preparing a bid to host the secretariat where the work will be done.

“Nigeria has played a leadership role in the negotiations. Our chief negotiator and director-general of the Nigerian office for trade negotiations was the chairperson of the negotiating technical team.

“Also the African Ministers for Trade and Group was chaired by myself and so, if they played a leading role in this negotiation, we feel that it is better to lead than to follow. Therefore, we also got an approval to express an interest in the secretariat of CFTA, that the headquarters be located in Nigeria. Obviously, we are expecting it to be a competitive process but Nigeria will be interested.

“We also got an approval for the Nigerian office for trade negotiations along MDAs and the private sector to work together and continue with the next stage of the negotiation. The first stage is the overall framework establishing CFTA. The next is the protocol on trade in goods and associated annexes; also a protocol on trade in services and finally, the protocol on rules and procedures for the settlement of disputes,” he said.

Also briefing, the Minister of Foreign Affairs, Geofrey Onyeama, said in line with the vision of African heads of state and government to promote free movement and trade in Africa, CFTA was conceived to remove trade barriers.

He said the development would be resourceful for Nigeria, noting that the country which is made up of 180 million population ought to be the economic engine of the continent that the policy can help it to achieve.

According to further information provided by the presidency on the policy, with the advent of CFTA, the continent said to be a market of 1.2 billion Africans with a combined gross domestic product (GDP) of $2.5 trillion is expected to witness an increase in intra-African trade by up to 52.3 per cent.

Furthermore, the presidency said all AU countries would share in the welfare gains estimated at about 2.64 per cent of continental GDP of $65 billion in 2018 and consequently expand the size of Africa’s economy to $29 trillion by 2050 as estimated by the United Nations Economic Commission for Africa.

Specific gains listed to accrue to Nigeria from the policy include: expansion of market access for Nigeria’s exporters of goods and services, growth and job creation; elimination of barriers against Nigeria’s products and provide a dispute settlement mechanism for stopping the hostile and discriminatory treatment directed against Nigerian natural and corporate business persons in other African countries.

The policy, it was added, would stimulate an estimated 8.18 percent increase in Nigeria’s total exports, with a small structural shift in Nigeria’s economy towards manufacturing and services and is expected to lead to a total increase in Nigerian economic welfare by 0.62 per cent equivalent to around $2.9 billion in 2018 terms.

“However, the level of consultation needs to be much wider and FEC also pointed that out.

“In fact, tomorrow the Minister of Foreign Affairs is holding a meeting tomorrow with MAN and other stakeholders and this is just a process that will continue. So, we do expect to engage and we have been asked by the presidency to widen those engagements to include more people, go to the geo-political zones which is why it is important to have an interaction with you the media today.”