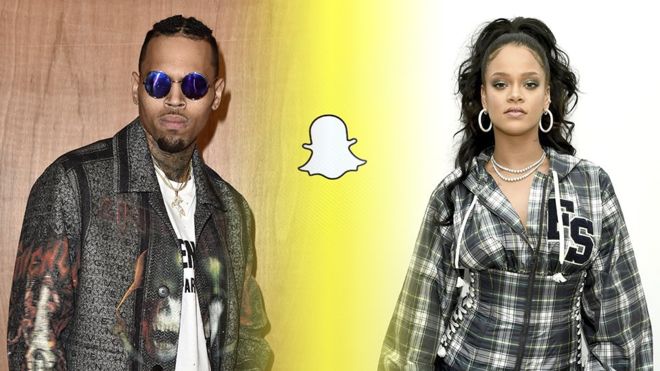 Chris Brown and Rihanna who were one time lovers and reported to break up as a result of domestic violence had been mistakenly put up in an awful advert by Snapchat.

Snapchat had to remove an advert from its platform that it says “makes light of domestic violence”. The advert, which is for a game, asks users if they would “rather slap Rihanna or punch Chris Brown”.

The advert which a simply refrence to Chris Brown’s conviction for assaulting Rihanna in his car in 2009 while they were dating. Snap told Newsbeat the advert, which was only published in the US, was published “in error” and had been removed immediately.

Ads on the social media platform are subject to a review process, while it also has a list of banned content.

Snap said: “The advert was reviewed and approved in error, as it violates our advertising guidelines. We immediately removed the ad last weekend, once we became aware.” “We are sorry that this happened,” it added.

Is it just me, or is this ad that popped up on my Snapchat extremely tone deaf? Like what were they thinking with this? pic.twitter.com/7kP9RHcgNG