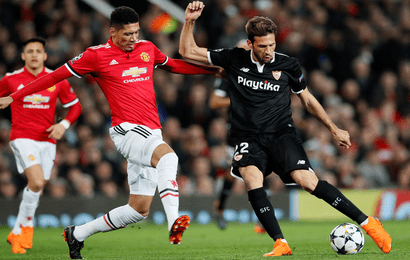 The Spaniard team, Sevilla shocked Manchester United with a 2- 1 defeat of the English term in the UEFA Champions League last 16 after substitute Wissam Yedder came through for his team twice at Old Traffford on Tuesday.

Jose Mourinho’s side were stunned by the two late strikes from Yedder and although Romelu Lukaku pulled a goal back, United’s once promising European campaign came to a sorry end.

Wissam Yedder put his team in winning ways in the 72 minute of the game, 87 seconds after coming off the bench and the 76 minute with a header that hit the underside of the bar and went in.

“In spite of the fact we didn’t create chances in the first half, we were good, very good, up until the final third, and we gave Manchester United very little chance near our goal,” said Sevilla’s Italian manager Vincenzo Montella.

Mourinho added: “I don’t think the performance was bad. I did my best, the players did their best. We tried, we lost and that’s football.

“We had chances to score and again in the second half we had chances but the first goal would always change the direction of the game.”

Lukaku volleyed home from close range after Juan Mata had flicked on a corner in the 84th minute but there was to be no comeback for United.

Sevilla had not looked a real threat in what was a generally poor quality game until the introduction of Yedder with 18 minutes left.

Naija News understands that Sevilla, who are fifth in La Liga, have never before reached the last eight in the Champions League, although they made the European Cup quarter-finals in 1958