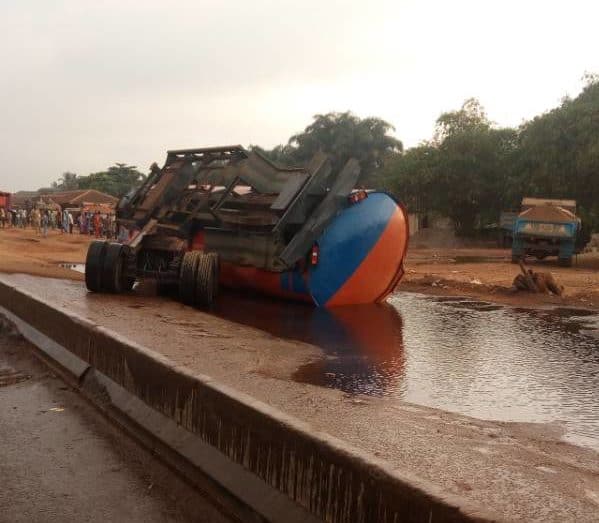 33,000 litres of Premium Motor Spirit  tanker  has fallen  on the road early this morning at Singer Area, Sango-Otaa. The tanker travelling outside Sango-Ota fell at a failed section of the road and crushed a white Hyundai delivery van, which was by its side. Naija News Learnt

The content of the tanker spilled on the road and drainage channels around the area, forcing vehicles to be diverted to the opposite lane, which led to a gridlock.

Naija News gathered that the ill-fated tanker fell at a section directly in front of a Conoil filling station. But the timely arrival of security and traffic agencies to the scene save what would been a disaster, as okada riders and street urchins had besieged the scene with various sizes of kegs and other containers, ready to scoop petrol.

But policemen, personnel of the Nigeria Security and Civil Defence Corps, Ogun State Traffic Compliance and Enforcement Corps and the Federal Road Safety Corps, were on ground and they kept the intruders at bay.

The Public Relations Officer of TRACE, Babatunde Akinbiyi, told our correspondent on the telephone that the incident occurred between 5.30am and 6am.

He said, “The tanker fell this morning between 5:30 am and 6 am but the area had been cordoned off to avoid any form of disaster. Apart from TRACE, the Police, Federal Road Safety Corps and firefighters are on ground at the scene, to prevent people from coming to scoop petrol, which is quite dangerous.

“Efforts are being made to remove the tanker and the Hyundai van from the scene.”