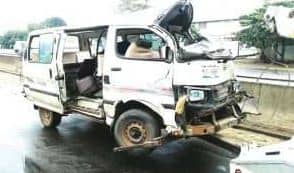 Four persons reportedly lost their lives on Sunday in an accident that occurred at Lekki Toll gate, Lekki-Epe Expressway of Lagos state.

Naija News gathered that the accident occurred after a Lexus GX470 SUV, ran into a commercial bus that was just cleared by the ticketing officers at the toll gate.

Two persons died on the spot, while two others reportedly died at the Lagos Island General Hospital, Marina, where they were taken to for treatment.

The accident also left a total of 16 others severely injured.

“Emergency and security operatives were involved in traffic management (to forestall the occurrence of a secondary accident), crowd control, medical care to casualties and moving of victims to the general hospital and the Trauma Centre at the toll gate for further treatment.

“The two victims who died at the scene were handed over to SEHMU, while the remaining two were later confirmed dead.”

“This particular incident will be investigated by security operatives, while the state government will ensure prosecution of the culprit to serve as a deterrent to errant motorists,” he added.