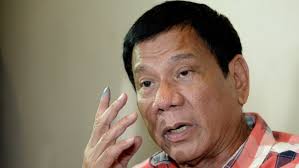 This he said in reaction to Duterte’s recent affront against United Nations human rights activists.

“He needs to submit himself to some sort of psychiatric examination. This kind of comment is unacceptable,” Al-Hussein said.

The Philippines justice ministry in February said it wanted a Manila court to declare the Communist Party of the Philippines and its armed wing, the New People’s Army, “terrorist” bodies, but made no mention of individuals it would also target.

Since he resumed duty in July 2016, Duterte had freed some communist leaders to show his commitment to finding a permanent solution to a five-decade conflict.

He claimed to have stopped the process in November due to repeated attacks by the NPA during talks
The petition said the rebels were “using acts of terror” to sow fear and panic to overthrow the government.

Duterte said the Maoists are security threat as the domestic Islamist militant groups that have pledged allegiance to Islamic State.

“By declaring groups and individuals terrorists, the government would be able to monitor them more closely, track finances and curb access to resources, among other measures”.

“There’s a long history in the Philippines of the state security forces and pro-government militias assassinating people labeled as NPA members or supporters,” he said in a statement.