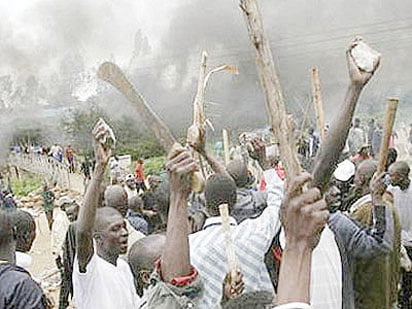 About six persons, yesterday ,sustained various degrees of injuries in a clash between hoodlums and some foreign currencies traders at the Ekiosa Market, Oredo Local Government Area of Edo State.

Naija News gathered that the hoodlums attempted to extort the traders, but the traders vehemently refused. This led to a fight which left six persons injured.

One of the traders, whose money was stolen, Muhammad Basiru, said one of the hoodlums, named Osaze, was always coming to beg for money “but today, he invited some of his friends to come along with him to steal hard currencies market.”

While speaking with newsmen, Alhaji Gbadamasi Saliu, Chairman, Hausa Community, Edo State, said he was in his office when he received a call that hoodlums have attacked some of his people that trade in hard currencies at the Ekiosa Market.

Saliu said though the amount of money stolen cannot be ascertained now, the situation has been brought under control by the security agencies deployed to the market.

Gbadamasi said no life was lost, but some of the traders were badly injured in their attempt to resist the hoodlums.

He thanked the security agencies for their prompt intervention. Confirming the incident, Edo State Police Public Relations Officer, DSP Chidi Nwanbuzor, said the Command was on top of the situation.