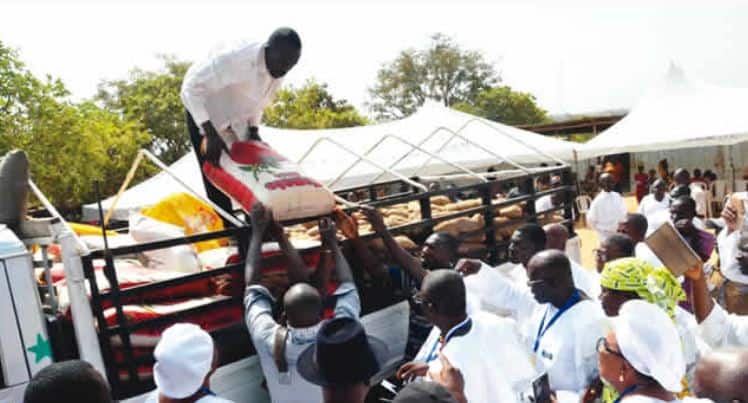 Scene of the accident.

A truck conveying 600 bags of rice has crushed eight people, including a nursing mother and her infant to death in Nasarawa on Monday morning.

It was learnt that the truck crashed into two houses, one of which belonged to a man identified as Mr. Danjuma Omaku, whose aged mother, Otunsha, just died.

Omaku said most of the victims of the accident were people who paid him a condolence visit.

“Majority of those that died in my abode were sympathisers who came to condole with me over the demise of my mother. They were at my compound when the truck lost control and crashed into the house,” he said.

Omaku therefore, called on the government and the truck owner to assist his family as they had lost their home.

He said, “I lost over five rooms, including shops, and I have nowhere else to go to.”

Eyewitnesses said that the driver of the truck, who was suspected to be drunk, lost control of the vehicle, crashing it into two houses along the road.

An eyewitness, Danjuma Ibrahim, said he heard noises and saw the truck crashing into two houses nearby.

“I heard people shouting and I had to run for my life, but before I knew what was going on, some people were hit by the fast-moving truck which lost control and in the process crashed into two houses nearby,” he said.

A survivor, Mr. Abdullahi Wanzan, told Northern City News on Thursday, that he was just lucky to escape.

Some of the people injured in the accident had been reportedly taken to Doma General Hospital and others to the Primary Health Care Clinic in Igbabu.