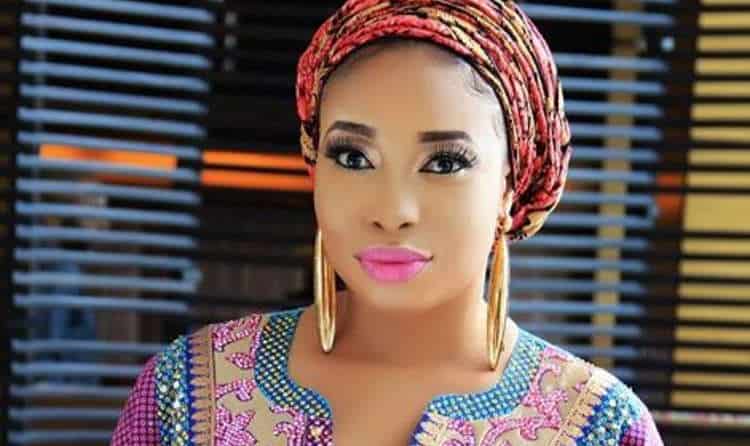 Nollywood Actress, Lizzy Anjorin has shared her growing up story on her Instagram page.

She narrated how she slept in shanty with her mother and how she used to hawk before going to school.

She also recounted how she worked at an Amala joint to fend for herself and her mother, how she became pregnant for a man who was from a rich family and how she suffered rejection from the family members.

She also shared how she had to leave her daughter for 10 years in order to seek a better life for them both.

After leaving her child, she narrated how she slept in churches, often beaten with brooms and how she engaged in odd jobs.

She wrote: “I’m locking it down today for Almighty Allah, my late mum and the people that have been patronizing me… Infact yestday was a joyful day for me and it’s also a day that draws me back to my childhood memories, but i was down since 2am till now , i cant even attend to pple properly cos smone is missing .. though nobody knows all this about me except I tell them bcos I don’t keep friends but today. i’ve be been librating pple on my platform wit orisirisi stories but today am tell u mine for pple to knw life is not a bed of rose.

“I give glory to Allah for His genuine love and His protection..
Each time i think about it, I get scared on how to make it bcos I was born with a silver spoon but everything scattered that I can’t even be identified with a panda spoon as a child… I grew up with my mum alone on the street, we hustle together, we were both forsaken and forgotten on street, we both worked 20hrs, slept for 2hrs and arranged our goods for 2hrs: it was tough and lonely.. it got to a point that i asked my mum the whereabouts of my dad and she told me; u can only meet ur dad and his family when u make it in life..‎

“I hawk early in the morning b4 school opens and I have to rush back to an uncompleted KIOSK we lives to pick something for school in order not to be late for that day lectures… For a very long time we don’t eat meat except raining season when we picked tiny snails to eat, we picked carton on refuse-disposal to sleep and whenever it rained we both remained standing.. Whenever she went hustling, i did “Omo odo alamala’ and that was where I met my baby father.

“Mum, u told me to have a baby bcos u don’t want the two of us to perish on the street.. Yes! I followed your words but i was turn down by my baby father’s elder brother: if u are seeing this post let me remind u of what u said to my baby daddy in front of me and my mum then, you said; mama ko possible se eyin le gba iru e, omo commissioner wa n be aburo mi o fe, what did he see in this poor servant of a poor restaurant, u guys are stinking leave my house or i loose the dogs and my Mother in-law(Iya ijebu) ran after us and said;.omo mi, u will follow me to Jos bcos my son confessed to me that he was the one dat defiled u.. ‎

“Even when I gave birth to the innocent girl, this man(my baby daddy brother) refused to touch her till date despite the fact that my baby daddy died few months after I gave birth to my daughter.. even after we lost the child’s father: you didn’t give us a dime bcos I be omo nobody to you but thanks to my baby father’s mother(Iya Ijebu terminus market Jos), she stood by me then… ‎ I remember when we were going to Jos, mama told me to hide and lied to u that she want to pee in order to hide me @fagba bus-stop and immediately u saw me u told ur mother dat i cant step into ur car and u dropped mama loads instantly and zoomed-off.. I sat on motor-engine from ido to Jos(you can imagine how painful it was)..

“I can’t even remember how many times I fell down with the pregnancy trying to sell to customers what we don’t have in mama’s shop bcos I believe I must make money for her, she must not regret of bringing me to Jos bcos her son warned her.. I got to Jos with one cloth and Ghana-must-go bag filled with nylon.. she told me to change my cloth but i was shivering, so she opened the bag and saw plenty nylon, then she said; did u mistakenly pick someone’s refuse and I told her dat, that was the nylon i do slept on, then she opened her wardrobe and gave me 10 new wrappers.. She never called me to ask for money, even when I sent money to her, she told me not to send money again and get on my feet first.

“I can never forget you(my mother in-law) iya rere…‎ On my baby naming ceremony, she sat as my husband and she did an elaborated naming for my baby.. Since i got to Jos my baby father didn’t talk to me till the day he left dis sinful world(rip), bcos his brother made him realized that it’s very ridiculous for him to let a low servant like me have a baby for him.. ‎Don’t let me tell u all what i went through in the labour room… even the doctor was wondering if i was holy mary they brought out scissors to help the virginity, i can’t even forget how i held the bed sheet and gnashed my teeth on the wet cloth during the cutting and sewing of my V…

“My suffering doubled again cos I had a baby girl, they made me realized that female child holds no value in their family and male child is the real child.. I endured and cried often; I couldn’t even imagine what my poor mother was going through all alone at that moment bcos she had me with menopause, she is aged already and that’s what prompted me to determine and focus that I’ve to make it in life.. i left the baby when she was a year and half old and I never set my eyes on her until she clocked 10yrs bcos of the tortured and molestation I received from pple as omo nobody.. their molestation made me to determined to die on the street or make it and go back for the child, so I came to Lagos from Jos. When i got to Lagos i didn’t go to my mum bcos she will be so disappointed in me bcos she won’t understand what I passed through except iya ijebu… Everybody don’t want omo nobody in their midst, the day i left my daughter, she was crying bitterly and dat day i re-named her to

“So i became church rat, i slept in churches, do odd jobs in day time.. May God bless the churches i slept in then but i can’t forget how many times i was beaten with bunch of broom bcos I was framed as emere(wizard) cos i was fair in complexion with slit read hair… It was so tough in my toilet cleaning job.”