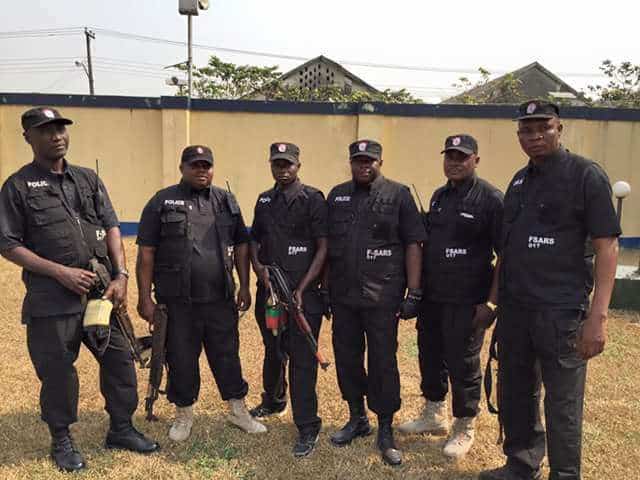 -The Nigeria Police has rubbished calls been made in certain quarters for the scrapping of the Special Anti-Robbery Squad (SARS).

-The force PPRO stated that the campaign against SARS is been sponsored by criminally minded individuals as the unit has performed excellently in curbing the activities of criminals in the society.

Police reacts to calls for the scrapping of its SARS unit.

Social media has been agog in recent days over calls by many Nigerians from various walks of life and social standings,calling for the immediate scrapping of the Police Special Anti-Robbery Squad Unit (SARS).

The ongoing campaign against SARS operatives is heavily connected to claims of several abuse and harassment of innocent citizens of the country by the men of the unit.

However, in its reaction to the call by several Nigerians, the Nigerian Police Force, speaking through the Force Police Public Relations Officer, CSP Jimoh Moshood, in an interview with Vanguard, has labelled those championing the scraping of the unit as armed robbers.

“Anybody calling for scrapping of SARS is an armed robber, let him come forward so that we can investigate him.” He said.

“Any complaints they give against any police personnel, everybody knows that we don’t hide it.

“We have a Public Complaints Bureau which handles complaints. So if anybody is calling for scrapping of SARS, we don’t need to be reminded that they are criminals just using the social media.

“If there are robbers that are operating and Special Anti-Robbery Squad engage them and somebody would now put something in the social media and say they should scrap SARS, I think it’s unfortunate.

“If there are specific allegations against any police officer whether SARS or no SARS, there’s a control mechanism for any of us that violates the rights of Nigerian citizens to be dealt with appropriately.

“You have seen instances where police officers have been tried, found guilty and charged to court.

“Those mechanisms are there, so it would be mischievous for anybody to call for scrapping of SARS. You want armed robbers to take over everywhere?”

“So, those who are calling on the scrapping of SARS are people to be suspected, I think they are robbers themselves.

“If there are complaints of atrocities against any police officers, they are being dealt with appropriately, we don’t hide them.

“You have been reading how police men that misbehave in their lines of duties are being dealt with. So anybody that is calling for scrapping of SARS has something to hide.

“The police authorities cannot and will not scrap the Special Anti-Robbery Squad, SARS for these criminals to thrive because it’s not our problem.

“The people that have been fighting armed robbery, fighting kidnapping and make a lot of successes?

“Look at the number of people they have arrested along Abuja-Kaduna highway, look at the case of Evans. Don’t you know that Intelligence Response Team has elements of Special Anti-Robbery Squad in them.

“I’m just trying to let you know the viability, so we shouldn’t be dancing to the tone of the social media, that’s the comedians centre.

“If a person would call for the scrapping of SARS, is the person not an armed robber himself?

“They are just carrying their campaign in the social media.”