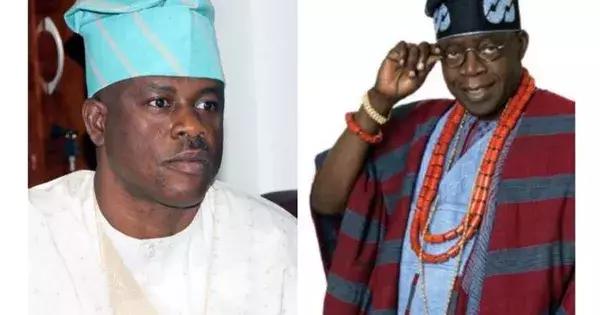 Naija News learnt that Obanikoro’s defection at his Lagos Island constituency ended months of speculations about the status of his political allegiance.

There were earlier reports that he had settled his differences with the national leader of APC, Chief Bola Ahmed Tinubu, as a step to joining the ruling party.

Though Obanikoro acknowledged reconciliation with Tinubu, he had neither denied nor confirmed plans to join his political mentor in APC.

He, however, finally gave the hint of his defection during a television interview on Thursday.

Obanikoro defected to the APC along with other PDP bigwigs in the state, including a former aide of former president Goodluck Jonathan, Mrs Modupe Sasore.

Others are a national officer of the PDP, Mr Jide Damazio, and another PDP chieftain, Chief Kola Balogun.

Past and serving members of the National Assembly including Sen. Ganiyu Solomon, Sen. Gbenga Ashafa and Rep. Jide Jimoh were among APC bigwigs present.

Presenting the APC flag to Obanikoro and others, Ajomale said the coming of the former minister and others meant the opposition was totally dead in the state.

He described Obanikoro as politically experienced and sagacious, and said his joining the party would no doubt add to the electoral fortune of the party in the state.

“We are happy to receive Obanikoro back in our fold. He was with us when we started the Alliance for Democracy (AD) but he decided to go the other way.

“Thank God he has realised his mistake and he is back. We are indeed happy to get back this big fish, along with others.

“Obanikoro is an asset and he will no doubt add value to our party,’’ he said.

Obanikoro, in his speech, said he was happy to return to the fold of his age-long political associates after his long sojourn in the PDP.

He said he defected because he couldn’t find fulfillment in the PDP and he joined the ruling party because he had a mission to render service on its platform.

The ex-minister said his former party could not offer him the platform for the kind of service he wanted to render.

“Today, I and others are not just joining the APC for joining sake, we are joining because we are on a mission.

“I had joined the PDP a few years ago with the hope that certain things would be done right to enable me make the desired impact. That did not happen.

“And now, Asiwaju Tinubu has taken leadership to another level, not only in the state, but at the national level.

“So, my joining the APC is not by accident. It is to return to my people and seek a platform on which I can render service to my people, because leadership is about service and co-ordination of talents to achieve results.

“We have looked everywhere, and the only party that offers that platform for service delivery is the APC.

“For me, this is not really a defection; it is a home-coming, because in a way, this is my root. I am happy to return to my people; no place like home,” he said.

Obanikoro praised the leadership style of Tinubu, which he said had ensured the development of the state.

He thanked Tinubu for being magnanimous to accept him back in the fold after years of altercations between them.

“I thank Tinubu for his magnanimity. I am here because he is generous and has a forgiving heart. If it were other leaders, they will say ‘God forbid’.

“He has accepted me back despite all the issues between us, I am grateful to him,” Obanikoro said.

The former minister said he we would do his best to add value to his new party.

Also, Sasore and Balogun took turns to thank the party for allowing them into the fold.

They said they could not find fulfillment in PDP hence, the decision to join APC.

The duo promised to do their best to ensure APC progresses in the state.

Imam, in his remark, said the party was happy to receive Obanikoro and others.

He said the defection meant the party was the only party in the state, as it marked the end of PDP.

The National Vice-Chairman of the APC (South West), Chief Puis Akinyelure, who represented Tinubu, said the party was glad with the home-coming of Obanikoro and others

He said the defection meant the PDP was dead as Obanikoro was one of its pillars in the state.

NAN reports it was a carnival-like ceremony as party faithful danced and sang to receive Obanikoro and the others.

A popular Fuji musician, Wasiu Ayinde Marshal, was on hand to thrill those present.